Hey, Look: The World Cup Is On!

Share All sharing options for: Hey, Look: The World Cup Is On!

World Cup season is finally upon us in South Africa, and you know what that means: horns. 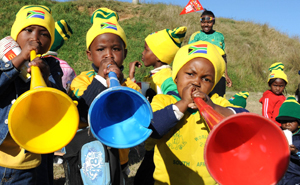 Lots. And lots of. Horns.

To be honest, the South African vuvuzelas haven't been that difficult to tune out, but hearing them for a 90-minute span completely takes away one of my favorite parts of the game: obnoxious, drunk fans cheering and singing as loud as they possibly can. Hearing these fans, particularly in England or Spain, riles you up -- it makes every moment 10 times more exciting. Hearing the sound of angry locusts doesn't do the same job for me.

Everyone has made such a big deal about how the vuvuzelas are "part of African culture" and how they couldn't be removed. But isn't this a worldwide event? Players and coaches alike from various nations have complained about the horns, and some have asked for them to be banned. I wouldn't want to play in front of them either.

Plus, it makes things a little confusing for you as a player if you're trying to gauge the reactions from fans.

Player 1: Hey, man. This crowd hates you for some reason.

Player 2: What? No, no -- you've got it wrong. They love me. They've been cheering for me the entire game.

Player 1: Look at them. They might as well place a tranquilizer dart at the end of the horn. They look pissed.

Player 2: They're just trying really, really hard to cheer for me. Wait, how do we know that I'm the one being cheered for or against?

On a separate note, Joe Biden was in attendance for the South Africa-Mexico match, and he looked miserable. I would be too if I had to be there for the vuvuzelas.

Not... not... not the game. We're talking about vuvuzelas.