While Ron Artest is doing his best to sabotage the Lakers' offense in the NBA Finals, the Rockets must be sitting pretty knowing that they made the right move in letting him go.

Share All sharing options for: Artest Only Further Proving That Rockets Made Right Move In Signing Ariza

Rockets fans continue to sit in stalemate. Quietly, we find something, anything to clench our fingers around -- a transaction, a believable rumor. Chris Bosh news. Anything. But no such gift has been bestowed upon us. Instead, we play the waiting game. We wait for the draft and we wait for free agency. It's not very much fun. Perhaps some controversy could arise to relieve us of the boredom, but alas, the only meaningful news out of Rockets camp in the last few weeks was Kevin Martin's decision to pay for a random boy's funeral.

Maybe there's a reason why the Rockets rarely make a blip on the national radar. It's because they're dedicated, mature and hardworking. Everything that the media despises in a professional basketball team.

I guess it's a good thing to be boring. In most cases, major sports news doesn't stick to the brighter things in life. Zach Randolph's drug controversy? No thanks -- you can have that one, Memphis. As uninteresting as the Rockets tend to be at times, they like to be that way. It's all about basketball, the way that it should be.

Thus, with scarce resources lying around, it's time to talk about Ron Artest. 'Cause talking 'bout Ron never, ever gets old. Especially in retrospect.

Prior to last season, the Rockets made the decision to sign Trevor Ariza rather than retain Artest. For those of you who never fully understood what took place, there was no trade between Houston and Los Angeles. The Rockets were the more appealing destination for free agent Ariza, and the Lakers had to find someone to replace him once he left. Though the official transaction took place in reverse order, this is a basic summation of what happened.

Each team was questioned for its respective move. For the Rockets, it was, "Why let walk your only chance at making the playoffs next season?" For the Lakers, it was, "Why tamper with a championship product?" The latter criticism was quite unfair, as Ariza turned down a good offer from Los Angeles ($28 million over five years) in order to take a better one from Houston ($33 million over five years). With the Lakers still hoping to lock up Kobe Bryant and Lamar Odom, they didn't want to use a truckload of cash on their fourth to fifth-best player. They instead took Artest for $18 million over three years. So, if we're going to evaluate who made the better "move," we can only look at Houston -- Artest was the best option that the Lakers had, and they took it. 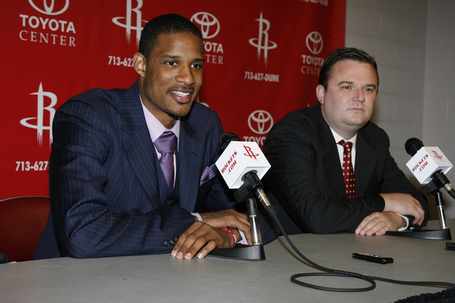 Immediately, aside from the "playoffs" question above, the move appeared to make plenty of sense from the Rockets perspective. Ariza was a young and developing talent, and while $33 million isn't exactly cheap, a player of Ariza's caliber and leverage (he was coming off an impressive playoff and championship performance) could have garnered more money.

Age played a factor as well. Ron was almost thirty. Trevor had just turned 24. Judging by the direction the Rockets were headed, it wouldn't have made much sense to pay nearly the same amount of money for A) An older player past his prime, and B) A player who, when given the reigns, had completely sabotaged the offense at times, especially in the playoffs. The Rockets may not have needed to rebuild, but they needed to reload. In that regard, Artest didn't fit the bill.

Above all else, though, it seems that the most pivotal aspect of Morey's decision not to retain Artest has finally illuminated itself to the public. Artest has long been tagged as a fantastic defender (accurately) and a capable scorer (not so much). It took people until this year's NBA Finals campaign to realize something that Rockets fans had long known to be true.

Ron Artest, when trusted to do anything more than play good defense and pass, is not very good.

He's not just one dimensional -- when it matters most, he can become so detrimental to an offense that you might as well forget about that one dimension altogether because it's not worth putting up with the extra baggage. Simply put, he's there for the name on his jersey, and nothing more.

Artest has his good moments. Take, for instance, his last-second put-back over Jason Richardson to stun the Phoenix Suns in the Western Conference Finals. Those happen every once in a while. But then there are the crazy three-point shots or brainless fadeaways that come along for the ride, too. How 'bout that shot that Artest took immediately prior to the put-back that nearly cost the Lakers the game? We can't just forget that it happened -- it's a single example of what happens quite often. An obvious, logical decision can stare Ron dead in the face, and instead he'll go and do something that we never thought a sane, professional basketball player would rightfully attempt.

The Boston Celtics series has been a disaster for Artest, much in the way that the Lakers' series was last year when he played for the Rockets. In the most important situations or most critical series', Ron Artest might show up, but he certainly won't do much to help. In his last four games against the Celtics in this series, Artest has combined to score 24 points on 8-33 shooting. He has also gone 5-13 from the free throw line. 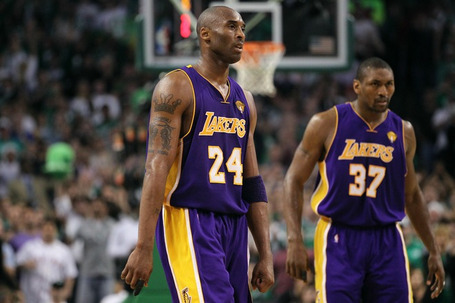 While it may be true that Ron isn't the star of the Laker offense, he doesn't seem to understand the idea of shooting percentages, telling Reuters:

"We won on the road and I had two points," Artest said Saturday. "I don't need a big game offensively. We just need to win. You can have a breakout game and still lose.

Artest may have scored two points on just four shots that game. But what about the loss to Boston in which he scored just six points on 1-for-10 shooting. Or the loss in which he shot 2-for-9 and scored just seven points? While Ron may think that he's helping the Lakers by not scoring a bunch of points, he's making life on his teammates much more difficult than it needs to be by continuing to shoot bad shots.

Take a look at Artest's stats from last year's playoffs. In his last four games against the Lakers, he combined to score 38 points on 17-for-61 shooting. This would be a good time to hide the women and children.

When depended on to any degree, Ron doesn't really know what to do. He treats a crunch time situation the same way that he treats, say,  the second possession of the first quarter. If the only thing he's got is a fadeaway jumper with a defender in his face, what the hell? He will gladly take it. His poor play and poor decision-making has returned yet again this season, and there are many who saw it coming. This, among other various reasons, is why the Houston Rockets hit a home run by signing Trevor Ariza.

We can't judge Ariza solely on how he performed this season. He was given far too many responsibilities, and as a result, he became incredibly inefficient. Now, with extra help in the form of Yao Ming and Kevin Martin, Ariza should return to his familiar role as a "sidekick" -- a saftey valve. If Trevor is open, he'll hit the shot, but otherwise, it is up to the others to create the offense. That's when Trevor is at his best.

Though I've only given a small, basic look at Artest's struggles, it's clear that signing Ariza was the right decision for the Rockets. It was the correct move even before the season started. regardless of Artest's 2010 Finals play. At least we now have some added proof to support mine and many others' opinion. And, as Rockets fans, we can't help but smile at the fact that the man who hurt our offense so frustratingly last season is doing the same for one of the teams that we dislike the most.

Now, back to waiting. Surely, something will happen in between now and June 24th. But probably not.