Top Five: Places In Houston To Watch The World Cup

Soccer is the world's game, and the United States is finally starting to take notice. Whether you're a new fan wanting in on the action, or a die-hard looking for a kindred spirit, we've got the best spots to catch a game.

Share All sharing options for: Top Five: Places In Houston To Watch The World Cup

World Cup Fever takes the entire world by storm every four years, and the United States is finally joining the party. It certainly didn't hurt that ESPN bought the rights to cover the event, and started promoting the ever-living crap out of it.

It also doesn't hurt that Team USA is finally starting to show glimpses of its potential. In the 2009 Confederations Cup, the Americans beat Spain 2-0, and took a two-goal lead over Brazil in the championship match before losing a heart-breaker. The Yanks opened World Cup play with a hard-fought 1-1 tie against heavily-favored England.

And so slowly but surely, America is catching on to the world's game. With a well-televised event and a home team worth cheering for, the World Cup is more popular than ever in the States.

Some of those of you who are a little newer to this whole soccer thing may still be in search of the ideal location from which to watch the game. Fortunately, we here at SB Nation Houston are here to help. As a warning, regardless where you end up choosing to watch the game, we cannot recommend strongly enough that you arrive early.

Enough foreplay. Onto the second edition of our weekly Top Five list... the Top Five places in Houston to watch the World Cup. 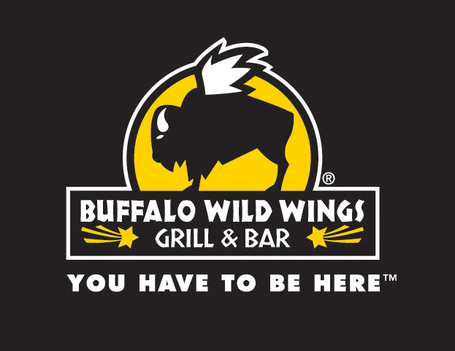 The beginner's choice. Don't quite understand the offside rule yet? Unsure what a "pitch", or a "kit" is? Are you stuck with the kids, but don't want to miss out on the excitement of watching the game around a large group of excited fans? BW3s may be the place for you.

You can't go wrong with the standard fare at B-dubs, and they do offer the rare, appealing watch party combination of being high on noise and excitement, and low on drunks getting in the face of you and/or your kids. On the other hand, if you're feeling a little more hard-core, may we recommend... 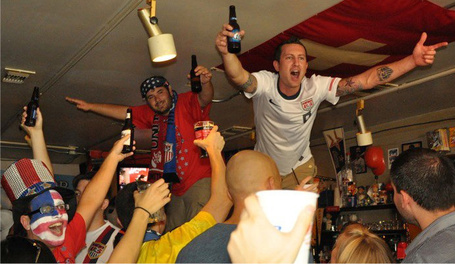 As previously mentioned on this site, Ernie's on Banks is the preferred watch party home for the Texian Army (one of the Houston Dynamo's fan groups) and the American Outlaws (a US National Team support group). As you might expect from a meeting of die-hard soccer fans in a bar, things got pretty intense for the England match -- picture a big ol' banner stating "Wanks Not Welcome".

Ernie's is not for the faint of heart, or for those who will be intimidated by fans whose soccer knowledge is otherworldly, but if you're looking for a group of rowdy Americans to party with during the game, you won't find a better spot. 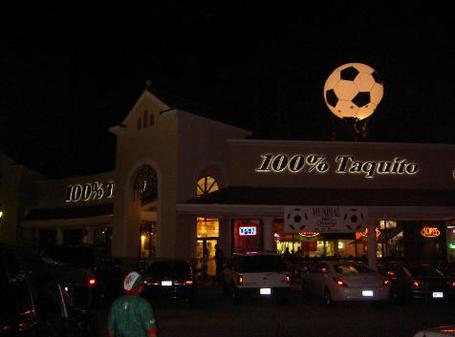 We realize that many Houstonians have allegiances to other squads besides the United States, including a large number of fans who cheer for El Tri. If you're leaning that way, head for 100% Taquito. Started in 1996 as a school project at the University of Houston, 100% Taquito stands out amongst a large number of competitors as one of the best restaurants in Houston for authentic Mexican food.

The food is reasonably priced and delicious, the staff is friendly, and there are a number of television screens showing the game, including a pair of drop-down projector screens. They open at 11:00 a.m. most days but open their doors early when Mexico plays the early game and serve breakfast. 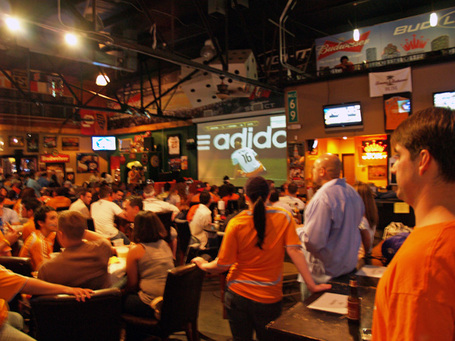 The Houston Dynamo will be hosting watch parties here for all games involving the United States. Lucky's has a large seating capacity, a good menu and a huge beer selection. You can't do much better for a watch party for any game, really -- Lucky's has already proven a favorite spot for fans of the Dynamo and the University of Houston.

Like Ernie's, you're likely to run into a pretty solidly pro-American fan base here, so don't forget to dress in red, white and blue. And despite the aforementioned, impressive seating capacity of the pub, the warning as to arriving early still applies. It will fill up. 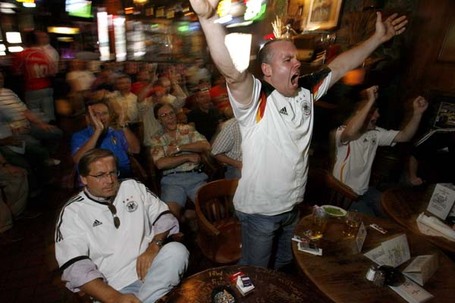 Pretty universally accepted as the best location in Houston to watch any soccer match, regardless of who's playing. Soccer fans covet spots near a TV the way teenage girls covet Jonas Brothers tickets. If you have the willpower to arrive early enough to nab some space, you will enjoy the experience, I guarantee it.

No location draws a group of fans as knowledgeable and diverse as Richmond Arms. The pub will be open for every World Cup match, and is likely to draw fans of every competing nation. Regardless of who is playing, and what's on the line, the atmosphere will be electric.

Two fair warnings: you will actually run into some opposition if you are rooting for the US, unlike Ernie's and Lucky's. Also, they are charging a $10 cover for some of the bigger matches, but that price includes two pints.

For fans looking for the true soccer football experience, there's no better bet than Richmond Arms.