Who In The World Is Koby Clemens?

A look at one of the more famously surnamed, yet underrated, Astros prospects and how he is doing this season.

Share All sharing options for: Who In The World Is Koby Clemens?

The headline is a question that I'm sure many Astros fans have asked in the past year and a half. After all, most probably had forgotten that Clemens was even in Houston's farm system, after he was drafted in the eighth round of the 2005 draft.

At the time, it was assumed this was a favor for Roger Clemens and a way to get him to play one more season. The tactic ended up working, but Clemens the Younger disappeared into the ether. So, who is he? Is Clemens a legitimate prospect? What position does he play? 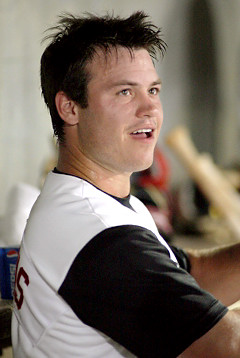 I'll do my best to answer all those questions for you about the Double-A Corpus Christi first baseman (pictured above). Let's start at the beginning. Here's what Baseball America said about him in 2006, when he was ranked as the No. 18 prospect in the Astros system:

Most Texas area scouts regarded Roger Clemens' eldest son as a decent player who'd be best off following through on his commitment to Texas rather than turning pro. So it was somewhat of a surprise when Houston took him in the eighth round and signed him for $380,000, the equivalent of late third-round money. But Koby proved to be better than scouts had thought and more than a nepotism pick. His best tool is his power, and he showed more pop and hitting ability than even the Astros realized he had. Growing up around the game enabled him to make an easy transition to pro ball, and he showed a feel for making adjustments. He has a sound swing and began to use the opposite field. Clemens has his father's build but in a 5-foot-11 frame, so he's not a tremendous athlete. He has the arm strength to play third base, but will have to exert himself to maintain the range and agility to stay there. That's not an issue because his work ethic (like Roger's) is off the charts. He had back surgery in 2004, so he might move to a less demanding position eventually. If Clemens can remain at the hot corner, he could develop into a big league regular.

Lots to go through here. First, it's a little shocking to see Drayton McLane go so high over slot two years before he failed to sign his top two draft picks in Derek D ietrich and Brett Eibner. I guess getting Roger Clemens back in an Astros uniform was worth making Bud Selig angry.

Even then, BA had his power pegged as his best tool. Remember that for these later profiles. He also is said to have a great work ethic but was not an athlete. It also seems like the scouts here thought Clemens might add weight as he matured. So far, that hasn't been the case, as Clemens was listed at 193 pounds in 2010. He hasn't grown any, though, as he's still at 5-foot-11. 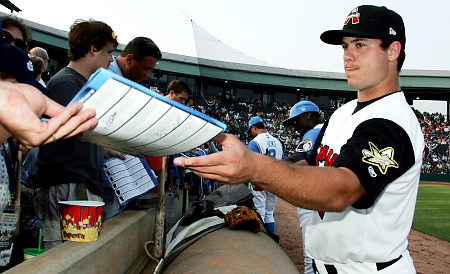 Clemens has also gone through at least four positions in the last couple of seasons. First, Clemens moved off third base and was converted to catcher. There were rumors this was in place a year before it happened, so Clemens the Elder could throw to Clemens the Younger in the Astros' 2006 Spring Training. He had the arm strength to throw out base runners, but had trouble with passed balls and wild pitches as well as the actual mechanics of throwing runners out. At Low A Lexington, other teams ran rampant on the base paths when Clemens was behind the plate. He was able to nail some of them, but his caught stealing percentage was well-below average.

That's why Clemens was moved off position again in 2009, playing some designated hitter and left field at Lancaster. Curiously, this was also a precursor for his best offensive season yet. Clemens did play 66 games at catcher in 2009, but hasn't been behind the plate once at Corpus Christ this season.

Clemens has exceeded expectations and had the best year of his career in 2009, leading the minors in RBIs (123) while ranking second in extra-base hits (73) and slugging (.620), third in doubles (45) and fourth in batting (.341). He was repeating High A and benefitted from playing at the launching pad in Lancaster, but he also performed well on the road in the California League. Clemens made strides at the plate last season, shortening his actions in his hitting approach. He did a better job keeping his head still and maintaining a stronger foundation underneath him. He's adept at working the right-center field gap and handles pitches on the outer half well. Despite his gaudy numbers, he project more as a doubles hitter with a chance for average power in the future.

It's easy to write off Clemens' 2009 season as an illusion, but I don't think it was entirely. He was repeating High A and Lancaster is a notoriously good hitter's park in a hitter's league. That said, he didnt' have much of a home/road split. He was just a monster everywhere in the Cal League. Clemens has always shown good power potential wiht decent plate discipline, but his hitting skills seemed to genuinely improve last year, though the numbers likely overstate it.

And from the 2010 Baseball Prospectus:

Clemens spent most of his year raking at High-A Lancaster, but a number of caveats attend that performance. His offensive numbers were backed by a ridiculously high .425 BABiP, which isn't sustainable in this or any other universe, and he was doing it in one of the best hitter's parks in perhaps the best hitter's league in the country. On the positive side, his strikeout rate remained manageable, and he continued to walk at a pretty good clip. He'll have to prove the power was real.

His numbers in 2009 were impressive, but just about everyone discounted them because of Lancaster's Clear Channel Field, which locals affectionately call The Hangar. Think back to that 2006 writeup, though. Clemens best tool was his power. After three down seasons in the low minors, Clemens power potential was dialed back quite a bit. The Baseball America writer even thinks he's more of a doubles hitter in the pros.

What's he done in 2010? Only put up more home runs in half a season than he's hit in all but one other time in his career. Even then, Clemens (16 HR) has just six less dingers than last season in half the plate appearances. Unless something drastic happens in the second half, it's safe to say Clemens will again top his season home run mark. 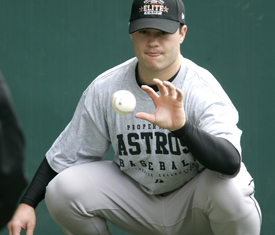 Clemens showing off his catcher skills

The biggest difference in 2010 has been his doubles rate. While he hit 45 in 2009, Clemens has only hit 11 this season and projects to hit 25 total. That means his extra-base hit rate is dropping, as he's projected to only get 55-60 extra-base hits this season. That's still a great number, and is more than legitimate because it came against a higher level of competition. He leads the Texas League in home runs and walks, is second in RBIs and third in slugging percentage.

He's also got a little higher walk rate than 2009, but this year's total is right in line with his career rates. As the profiles said, Clemens has always had a pretty good understanding of the strike zone, even though he tends to strike out quite a bit. Clemens has started 51 games at first base for the Hooks and has played the position well. The Astros would probably prefer to have him at a slightly more important defensive position, but his bat is certainly capable of playing at first. 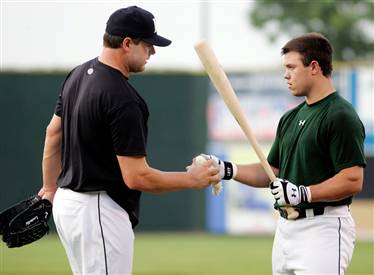 Clemens and his father, Roger

Notice I haven't discussed Clemens' father more than in passing. While it doesn't really matter to me, I know some of you probably have reservations about him because of Dad's steroids past. This whole sordid trial, complete with the Mindy McCready affair, must have been a huge distraction for Clemens the Younger. However, he's never really taken that on the field. From all the reports I've seen, he's a good teammate and there are no question marks about him off the field. But, because of his surname, Clemens will always face either higher scrutiny or bigger expectations. At this point, though, I think he's making a name on his own and deservedly so.

Because of all this, Clemens is shooting up the Astros prospect charts. He was ranked 20th by Baseball America this season and had just a C grade from Sickels, but with his performance to this point, he may have shot into the Top 10 in the Astros system. What do you think?