The Texans best returning corner has some unique statistical benchmarks, which side of them will he end up on?

Glover Quin finished the 2009 NFL season as one of the best rookie stories that practically no one outside of Houston heard about. An unheralded fourth round rookie from New Mexico, Quin joined the starting lineup as it became apparent that Fred Bennett was lost in defensive coordinator Frank Bush's schemes. Quin played a plurality of the snaps over the last three quarters of the season and had a successful, if not eye-catching, season.

Wearing my Football Outsiders charter hat again, I'll tell you that Quin struggled on underneath routes. Slants, quick outs and drags. Quin has terrific instincts and gets a good break on the ball, but he was a little slow last year when it came to change of direction and looked somewhat uncomfortable on the outside, particularly when backpedaling. During the Colts games, when the nickel was essentially the Texans base package, Quin would often play inside. This is a testament to both his own comfort at the position, especially when it comes to reading the quarterback off the snap, and his very solid tackling for a player of his bulk.

I'm not positive he's a long-term cornerback. I think he's a natural safety, and as someone who can cover, react, AND tackle, he'd be worth his weight in gold at the free safety position next to Bernard Pollard. The Texans don't have the kind of depth at corner to make that switch this year, but they also have no reason to make it unless he plays his way off the position. Quin is still quite young, and the learning curve for cornerbacks is oftentimes elongated.

Statistically, the number of cornerbacks who had a season like Quin's as a rookie is pretty rare. I lowered the numbers a bit to try and find a range of good matches. Here is every rookie cornerback since 1970 with 30+ tackles, 10+ games started, and 7+ passes defended, from Age 23 and up: 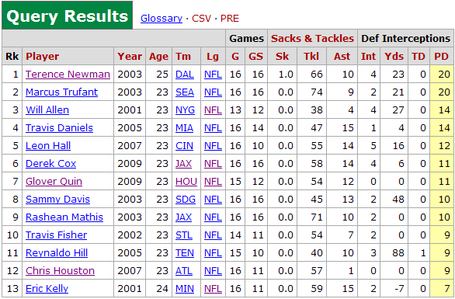 There are a few hits in here. Terrence Newman was a Pro Bowler, as were Marcus Trufant and Rashean Mathis. While Leon Hall hasn't been named to the Pro Bowl yet, he certainly made huge strides from his rookie year and had a Pro Bowl caliber season last year. Will Allen had a productive career, if not one that will earn him any accolades. There are also quite a few busts on this list. Travis Fisher has been abysmal, Travis Daniels has been shuttled around, Eric Kelly was out of the league in three seasons. Ditto Sammy Davis in five. It should be said that of the success stories, only Mathis wasn't a first rounder, and he was a high second round pick. Quin looks to be surrounded by mostly uninspiring and uncertain (Derek Cox) comparisons if you leave out the first round picks.

Interestingly, if you drop the age qualifier, you get a ton of terrific corners who started as rookies: pre-injury Dunta Robinson, Darrelle Revis, Nate Clements, Chris Gamble, Pacman Jones (when he played, he was good), and Charles Tillman, among others. If only we could send Quin through a time machine...

Now the other fun statistical quirk: Quin had one of 18 seasons since passes defensed started being recorded where someone defensed 10 passes yet had no interceptions. Here's that table: 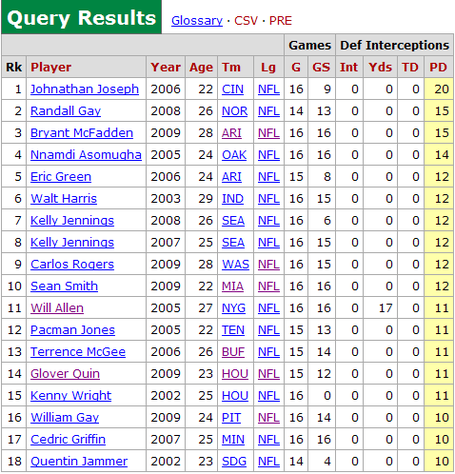 I'm curious to see what side of this chart Quin comes out on. While I expect him to have the instincts to pick off a few balls this year, there are several players on this list who simply have terrible instincts and don't make picks. Obviously, since he appears more than once, Kelly Jennings is one of them. Eric Green, Kenny Wright, and Randall Gay have had similar problems turning playing time into interceptions. Most of the others are good for at least a few picks a year, and made this list during a "fluke" season.

It is Quin's prowess that will be telling for the Texans this season. Kareem Jackson is often given the pressure in season previews because he is the first round pick, and the first round pick is always given the press, but replacing Robinson's meager contributions last year shouldn't be too much of a problem. Quin, given a full offseason of work and a year of familiarity in the system, will be asked to be the anchor of the Texans pass defense at a relatively early point in his career.

I have long-term optimism with Quin either as a corner or a safety, and I doubt he will fit into the same niche some of his comparables have fallen prey to. If he improves on last season right away and turns his defensed passes into interceptions, the Texans have another piece of the playoff puzzle figured out. Even if he doesn't, it's hard not to be optimistic about his future.