This past Thursday, the Houston Rockets selected Patrick Patterson in the NBA Draft. In the spirit of youth, Tom Martin looks at the best young athletes, aside from Patterson, that Houston has to offer.

"Upside" is a scary-awesome-combustible term. It's the culmination of many different aspects of a certain player's game, packed skin-tight like a dozen shirts and pairs of pants into a suitcase and zipped up until everything is all together in one place, under one single label. Forget what's actually buried inside. The particulars that make up a young prospect's game? They matter no more, because he's simply got upside.

Upside has lit quite a flame underneath professional, year-round draft coverage. It has sparked obsessive prospect interest as if it were akin to the faulty Apollo 13 oxygen tanks. Suddenly, the moment a player makes the slightest blip on the local high school radar his sophomore or junior year, he makes the local TV station, gets picked up by Rivals.com or Scout.com, is pressed to create an online MaxPreps profile, receives daily calls, letters or texts from college coaches and becomes one Google search away from hosting hundreds of people at a party on his recruit profile page. And in some cases, junior high kids get tabbed as "upside" guys.

I mean, what are we doing with ourselves? Some of these kids can't even drive. Can we let them legally purchase a ticket to an R-rated movie before we ogle them like they're starring in one?

Recruiting has turned into its own sport. People will pay money for scouting reports, coaches are needed to manage the programs, and kids are turned into stars before they even take the field on a higher level. For all of the attention that recruiting receives, it should have its own TV network, magazine and website. And then, each team that recruits should have the same three things catered to their local fans.

For my money, it's always interesting to look at the supremely talented high school seniors (particularly in basketball), the college kids, or even the professional rookies. And instead of bluntly stating, "These players have upside," I like to find out why, exactly. In this edition of the Top Five, we rank the top five Houston athletes with the potential to have a productive career. To be fair, I chose one person from each of the five local teams (UH, Texans, Astros, Rockets and Dynamo).

There aren't any guarantees with Francisco Navas Cobo. He's a boom-or-bust player, and let's be honest: It's tough to gauge Dynamo prospects anyway. But can we at least give the man a nod for his age? He's only 18 years old, and yet, he has signed a professional soccer contract and has been playing well of late. In fact, this very well may be the first professional athlete in Houston that is younger than me. Huzzah.

We're getting dangerously close to me placing my foot in my mouth about the whole "don't cover 'em young" thing. But Kohlhausen is going into his senior season with a ton of local buzz, generated mostly by the fact that he has committed to the University of Houston to play for coach Kevin Sumlin. He could be the true heir apparent to Case Keenum when it's all said and done.

Keep an eye on him this year and see how far he progresses. By the time he's a freshman at UH, he could very well land the backup job right away. ESPN has already called him a "very good prospect." Given what Sumlin has been able to do with Keenum, I'm very interested to see how Kohlhausen turns out. You know, once he officially signs and suits up for his first practice. 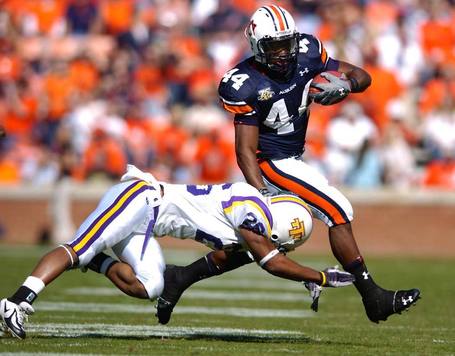 Ben Tate's senior season yielded 1,362 yards and 10 touchdowns against the vaunted SEC. If that's not promising enough for you, consider that Tate will be placed into an offense that has no clear running back, an improving offensive line and a stellar passing game that should open up plenty of room for whomever is handed the ball. By the looks of things, Tate could take over the starting job at some point during his rookie season. He's a big dude, yet runs a 4.43 40 and has very good vision. If injuries don't plague him like they do to many larger backs, he's got a chance to be very, very good.

In a year or two, looking back on the 2010 NFL draft, we could be mentioning Tate among one of the biggest steals in the second round. You may have noticed that, in the past, the Texans have had chances to take some pretty darn good running backs with one of their early picks and simply haven't done it. (Jonathan Stewart, oh what could have been...) They didn't pass on Tate, however, leading me to believe that they have big plans for the Auburn product.

He's already got a spot on my fantasy team, since you asked.

Disclaimer: I love Jason Castro, and I expect big things from him. He deserves a spot on this list and would be on it had I not decided to divvy it up by team. At the end of the day, though, Jordan Lyles has been nothing but spectacular in the minor leagues and he's only 19 years old. Give the kid some more time to develop and he could turn into a first or second starter in the majors. I'm serious.

Lyles has already been selected to play in the MLB Futures Game and has dominated since a promotion to Double-A Corpus Christi. He has a 2.37 ERA in 13 starts and has struck out 78 batters in 87 1/3 innings. That's production at it's best, folks, and we like production. Lyles has yet to disappoint in the Astros' farm system. There's no reason to think that he can't get better quickly and force the 'Stros to call him up before he can buy himself a drink. 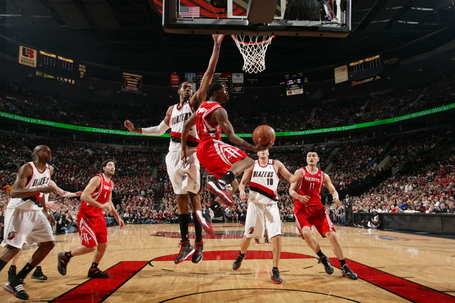 Believe it or not, Aaron Brooks is only entering his second season as the full-time starter of the Houston Rockets. For all of the step-back 3-pointers, infamous alley-oops and dirty crossovers that he has pulled against opponents thus far in his career, Brooks has yet to really hit his ceiling. He may be 25 years old, but Brooks has managed to improve each year with the Rockets. Now that he is returning to a familiar roster and system for the first time, it should be easier for him to concentrate on his own game and less on what is going on around him.

All throughout his basketball career, Brooks has been disadvantaged and figuratively thrown to the curb. Most of this can be attritbuted to his size (he is listed at 6 feet but he can't be more than 5-foot-10). Despite this, Brooks has produced when called upon and has found ways to implement his talents into the game. Coming off a career season in which he scored 19 points per game while improving his shooting percentage, Brooks looks to become the true franchise point guard and lead the Rockets deep into the playoffs. Once again, if the team stays healthy, they have a good shot at competing for a conference championship. Brooks would be a major factor of that equation if things were to play out in such a fashion.

There's no reason not to root for the guy. He has proved us all wrong before and he can do it again.