Jacoby Jones has the tools and the comparisons; will he get the playing time?

I find myself extremely biased at times, though I try very hard to hide it in my writing. I try to never refer to the Texans as "we," because as much as I pull for them, I'm not one of them. But I should come out up front and just admit that I love Jacoby Jones and hope he becomes one beast of a wide receiver. As someone who has made an Internet semi-career out of creating found poetry from his hilarious Twitter account, he brings me joy on a day-to-day basis.

So let's look at the big picture with Jones. If you actually checked out the link I gave you to his Twitter, I'm sure you could find enough in there for a football coach to say he still has "maturity issues" (I don't agree, but football seems to require damn near Zen discipline for some people). He has a track record of mental mistakes, both fumbles and lapsed concentration. He also has incredible tools: terrific speed, good hands, markedly improved route running and he's an enormous target in the red zone.

Historically, the track record of kick-returners-turned-receivers with this small of a sample size is pretty stellar. Here is a list of players who returned at least one punt, caught under 40 catches, over five TDs, started less than three games, and was age 26 or younger: 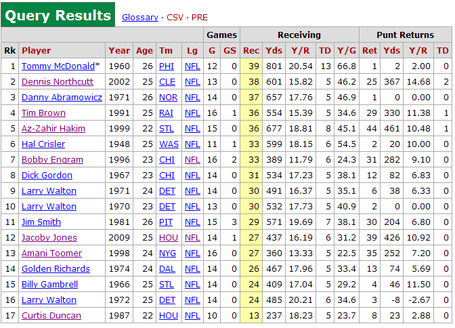 You can add Rocket Ismail as a comparable, as he returned kicks early in his career (but not punts). This essentially gives you eight "modern" comps: Tim Brown, Ismail, Amani Toomer, Curtis Duncan, Bobby Engram, Dennis Northcutt, and Az-Zahir Hakim.

Almost all of these guys have gone on to have a long career. Hakim faded quickly, but his speed was also somewhat of a property of the St. Louis artificial turf in the first place. Curtis Duncan made the Pro Bowl in 1992, but was also a product of the Run And Shoot and was out of the league after 1993. Everyone else on that list played at least nine seasons.

Perhaps the closest physical match to Jones is Toomer, who is listed at the same height as Jones, and was a little heavier. Toomer ended up outgrowing his role as a pure punt returner after his third season (sound familiar?), and wound up having five straight 1,000-yard receiving seasons before becoming a possession receiver once his speed faded. The worst case scenario on the list is probably Northcutt, who never outgrew his punt returner role and never had a year as explosive as his six-TD season again. Not that being a solid possession receiver and punt returner is anything to laugh at. Of course, the best case scenario is probably Tim Brown, who made the same kind of jump Toomer did, except he had nine straight 1,000-yard receiving seasons. He also, you know, made the Hall Of Fame.

Jones' season is going to have a huge bearing on this offense. The Texans have always surrounded Andre Johnson with good receivers, but they've never had someone with these sorts of tools and deep speed to stretch the field with him. Used creatively and often, Jacoby could jumpstart the offense into taking another leap. The big question is: How often will he play? Houston re-signed Kevin Walter to play second fiddle to Johnson for quite a chunk of change: five years, $21.5 million, $8 million of which is guaranteed. That's not sit-on-the-bench-and-twiddle-your-thumbs money.

Jones and Walter bring very different things to the table. Walter has speed, of course, but he doesn't have the physical prowess to overwhelm anyone, nor does he have Jones' ability to break tackles. On the other hand, Walter is a solid veteran who doesn't make many mental mistakes and has much more precise route running than Jones. How the Texans stagger the two of them will be very telling. Jones has much more upside and a list of comparable receivers that proves he should be taken seriously. Walter is steady and reliable, and certainly the safer play.

If it were up to me, Jones would be starting from day one. The Texans are up against the toughest schedule in the NFL, playing against a packed AFC playoff field. They need to make moves that could catapult them from good to great, even if they are risky. How Gary Kubiak and Rick Dennison decide the situation and handle it is going to be a key to the season.