Comparing Ballparks: How Do The Astros, Express And Hooks Measure Up?

Let's talk about the Astros and their top two minor league affiliates' stadiums and how they compare. What's it like seeing a game at each? Who's got the best scenery?

Share All sharing options for: Comparing Ballparks: How Do The Astros, Express And Hooks Measure Up?

I'll admit it, I'm a bit of a baseball junkie. One of my goals is to make the trek that so many have chronicled before: going to each of the 30 major league stadiums. I've currently been to five: Wrigley Field, Busch Stadium, Camden Yard, Minute Maid Park, The Ballpark at Arlington and... well, that's it. I've driven past Jacobs Field, Fenway Park, AT&T Park and Yankee Stadium, but wasn't there when they had games so I could go. I'm definitely going to Kauffman Stadium in August and possibly Coors Field next month. In the past year and a half, I've gone to four of those seven. That's what happens when you have a wife who likes to travel...

The other side of this baseball odyssey, and the reason that I'm spinning this long, not-very-interesting personal story is that I have also gone to both the Round Rock and Corpus Christi stadiums for the first time this season. Sandwiched around a couple trips to Minute Maid Park, it made for a very interesting experience and comparison. How different were these minor league parks? What did they get right that the Astros lack? What can the big league team do that the Reid-Sander Group cannot? I don't know if I can answer those questions, but I hope to at least start a discussion.

First, obviously, is the field itself. Minute Maid Park is a nice stadium. It's got the quirky features in center field, a train that moves around after each home run and over 40,000 seats. Neither Round Rock nor Corpus have over 10,000 seats at their respective parks. That means the seats are a lot closer to the action. Of course, I have sat in almost every section of MMP and never been in a bad seat. Even the highest seats in the stadium are great. I sat in the last row of the View Deck for Roger Clemens' first start with the Astros and still felt like I was right there in the game.

Dell Diamond is a gorgeous stadium. It looks understated as you're driving up; it certainly doesn't have the sheer size to impress like MMP does. It is, however, a great place to watch a ball game. The sight lines, the stadium's layout, even the way the field feels slightly sunken down below the seats is neat. That reminded me of the Astrodome a little. Though I didn't get to walk around much, since I was covering the game in a more official capacity than as a fan, I could see lots of areas for fan interaction outside the game.

Whataburger Field takes that up a notch. While the outside of the stadium is not imposing, the view inside is beyond compare. The stadium itself doesn't even look like it's there, because of the lack of outfield seats of any kind. Instead, they have two grassy areas where fans can hang out with general admission tickets. They also have a swimming pool, a very elaborate kid's playground and even a kid-sized field where they organize pickup baseball games. We sat just behind home plate and about halfway up our section, but it felt like we were right on the field. 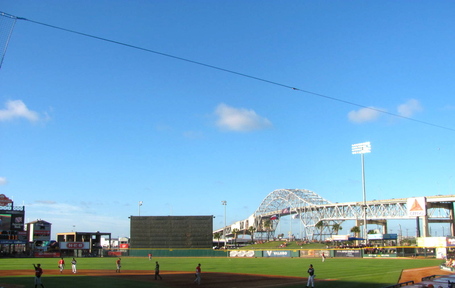 The point where Whataburger Field has the Dell Diamond beat is scenery. Round Rock's view outside the stadium is nice, but shots of the Bay Bridge beyond right field really give Corpus an edge. Add in the colorful addition of flocks of seagulls hopping around in the outfield, and the location really pushed the Hooks' home over the top as the best stadium experience I've had this season. I'm a big believer in scenery mattering for ballparks, even if it's for the little stuff.

For instance, one of my favorite Minute Maid Park memories is of a July 4 game when Jeff Bagwell hit a home run to right field to tie the game. It was late when he hit it and the Astros had just finished opening the roof. The sun had set a little before, so the sky was darkening but still streaked with orange and red. Just a gorgeous site to see his moon-shot home run disappearing quickly into that beautiful sky with a lit-up Houston skyline as the backdrop. Would I have remembered the home run if I didn't see all those things come together? Maybe, but it wouldn't have stuck in my memory as indelibly, I think. That's how I felt looking out at that bridge behind right field of Whataburger Field. It was one probably the view I'll remember most from my trip to Corpus.

It is the minor leagues, though. The prices are lower, but so is the play on the field. As excited as I get about prospects, that's not the typical fan reaction. Most don't know half the guys in the Houston farm system and with good reason. Most of those players will never see the major leagues. That's the one advantage the Astros will have; they will always have the most talent. Still, it's awful enticing to get two tickets to sit behind home plate and pay for parking for less than one field level seat at Minute Maid Park.

The in-game entertainment is also usually better in the big leagues. They have the fancy scoreboards and hordes of cameras to do things like the Kiss Cam and the dance contests. The minor leagues bring it too. As I mentioned this weekend at The Crawfish Boxes, I'd much rather see either of the two on-field contests the Hooks had last Saturday than another one of those god-awful Hot Sauce Packet races. Really? Is that the best the City of Houston can do? Milwaukee has its sausages, Pittsburgh has its pierogis and Houston has its Taco Bell? For shame!

it's not even that I dislike the corporate sponsorship. As I said, I'm perfectly fine with some sort of contest involving fans, free stuff and feats of skill. I don't like contrived races involving food products that no one every associated with Houston. Why not use peppers? Or seafood of some kind? The Shrimp Race wouldn't have caught on? Is Landry's out of money?

But, I digress. The amazing thing about all three of these parks is the interactivity. There was a ton of stuff for my son to do in Corpus Christi, as there is at the Dell Diamond and in Houston. In fact, MMP has a very cool kid's area. When my little guy is old enough to go through there, I'm sure he'll have a blast. It's obvious, though that both Drayton McLane and the Ryan-Sanders Group take the fan experience seriously. I was talking to a Hooks season ticket holder about the Corpus Christi owners and he had nothing but good things to say about them. In fact, they had a promotion the night we were there to give out Nolan Ryan bobbleheads, but the company that manufactures them sent out defective ones. My new friend at the game made the obligatory "heads will roll...or bobble" joke, but then said he really didn't think that was the case. Ryan-Sanders runs things too well for that. This was a small blip, not a sign of bigger issues. True to form, the Hooks staff offered to mail us our bobbleheads since we were from out of town and wouldn't be there when they arrived. I'll let you know in a few weeks if the Alvin Express is bobbling in my house.

I'd still probably rather see a game at Minute Maid if I had a choice. it just feels like the big leagues there. Both Round Rock and Corpus feel much like the best college baseball parks do, kind of like the NBA/College Basketball model. I'm definitely glad I got the opportunity to go to both parks, especially if Round Rock switches affiliations this offseason to partner with the Rangers. If you're a Houston fan and are trying to decide where to go on vacation this summer, definitely consider stopping by the local nine's home park in either Round Rock or Corpus Christi. It's a trip you won't regret.