Life is tough for Brian Ching. Recently, the Dynamo striker fell victim to roster cuts made by the U.S. National team just two weeks before the World Cup was set to begin. Talk about a blow to the gut. That's not something that one could simply "get over" in a matter of weeks, or months, or years. Despite that, Ching has been playing for his Dynamo, heavy heart and all.

Now that we've clarified just how much pain Ching is playing through, leave it to the Los Angeles Galaxy fans to walk all over the man with everything they've got. You know, just in case he wasn't feeling bad enough.

A third of the way into the match, the Los Angeles faithful began chanting, "U.S. reject" repeatedly in front of Ching, and later again in the second.

If anything, Ching can be happy that he isn't playing for the Galaxy himself, or else he'd be hearing this crap on a nightly basis.

I get it. As a fan, you want to get to the opponent mentally. Whatever it takes. Anything goes. I'm okay with that, but this is different.

It's not as if Ching mailed it in for his country. He played his butt off in attempt to make the squad, to try and represent the very people who chanted against his favor Saturday night. Ching wasn't "rejected" by America. If anything, he fell just one step short of becoming one of America's most un-rejected, well-reknowned citizens.

We're all Americans here, I think. There's no sense in chastising a player for trying to help his country. Find something else to make fun of, L.A. - as it stands, you're being quite un-American yourselves. And for that, you've officially been placed On Notice. 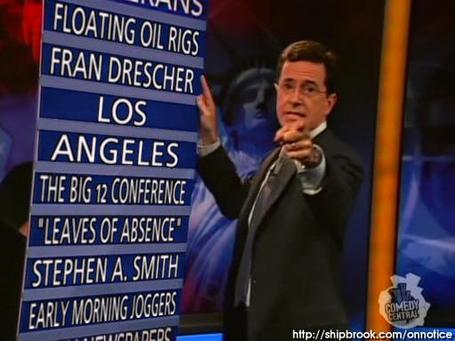