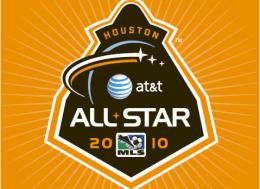 Tickets are selling quickly for the 2010 MLS All-Star Game in Houston on July 28.  Today, the Houston Dynamo announced that the entire lower bowl of Reliant Stadium has sold out almost two months prior to the match between the MLS All-Stars and former English, European, and World Champions, Manchester United FC.

Individual tickets for the All-Star Game went on sale to to the general public last Tuesday, and the initial public response, coupled with strong presale numbers by Dynamo and Texans season ticket holders has resulted in over 25,000 tickets being sold already.

When configured for soccer events, Reliant Stadium holds over 70,000 fans.  Those remaining 45,000 tickets should go quickly and event officials are expecting the All-Star Game to sell out.

If you are interested in purchasing tickets for the game, contact Ticketmaster, HoustonDynamo.com, or call the Dynamo offices.  Tickets can also be obtained through Dynamo partial plans, group sales, and other special deals.