Looking at precedent, we try to glean some perspective on the career of an outlier: Amobi Okoye, the youngest defensive tackle in modern football history.

Amobi Okoye, all things considered, has probably been the worst draft pick of the Gary Kubiak/Rick Smith era thus far. Picked 10th overall in the 2007 draft, right ahead of 49ers All-Pro LB Patrick Willis, Okoye roared off to an incredible start, winning Defensive Rookie Of The Month in September 2007 by posting four sacks. In his next 11 months of NFL football, Okoye has racked up exactly... four more sacks. Fair warning, Stephen Strasburg fans!

What makes Okoye so fascinating is that he's an extraordinarily unique player. He dominated as a college senior at Louisville despite the noticeable handicap of being 19, and when he made his NFL debut four months later, he became the youngest player to appear in an NFL game since 1967. Even after what could essentially be termed as 2 3/4 wasted years, he's about as young as anyone who came out in this year's NFL draft.

Coming out, Okoye was regarded as a "good young pass rusher with tremendous quicks [...] stopping the run isn't his forte." by Lance Zierlein, who later noted that "he has played his best when his weight was lower, so I don't think the Texans should be in any hurry to have him playing at 315-320, 300-305 is probably a good weight for him..." He drew praise from his very first OTA's as a rookie.  And of course, went on to that dominant start before fading badly over the rest of the season.

Next spring, Kubiak called him the most improved player in OTAs, John McClain thought that he was ready to bust out and take the Mario Williams path to stardom. And...well. Nothing happened. Sure, Hurricane Ike devastated the city, and Okoye played through injuries, but excuses don't get you too far in the NFL. He underwent arthroscopic knee surgery in the offseason and played all 16 games in 2009, albeit with little in the way of a stat line.

Right now if we are to look at the anecdotal evidence, the Texans had Okoye lose a lot of weight in the offseason. In other words, they're making him a true 3-technique, like Zierlein said they should approximately three years ago when they drafted him, as opposed to the 315-pound psuedo run-stuffer that they had McClain claim he was all offseason. Curiously, a search for his weight gain in the Chronicle archives led to nothing. In fact, the closest was about him losing weight prior to 2009.

While Okoye wasn't an epic bust on the field, he certainly did nothing to distinguish himself as more than a par tackle last year. In writing him up his review for 2009, as someone who watched and charted games for Football Outsiders, I offered this opinion:

The flashes and talent are always there with Okoye.  He can look absolutely dominant for a series, a quarter, even a half.  Then he can spend the next 15 plays adding absolutely nothing to the defense.  I advocate patience with him, because he is still incredibly young, but this is an enormous year for him.  Playing aside a nose tackle who demands a double team would be a good start for helping him out, but another thing that the Texans might want to look into is cutting his snaps.  He seems to tire easily subjectively, and I think it might be a nice wakeup call to say "Hey, we love you and all, but we want performance out there, not promise."

Losing weight should also be helpful for Okoye's career. As much time as I spent over on Battle Red Blog this offseason lambasting the Texans for not picking up a real nose tackle, they definitely need the players they do have to play their optimal game, and Okoye's optimal game is penetration, not stuffing the run.

This almost feels fruitless because of the lack of true comparables to Okoye due to his age, but a quick glance at tackles with similar age and tackle/sack numbers looks like this: 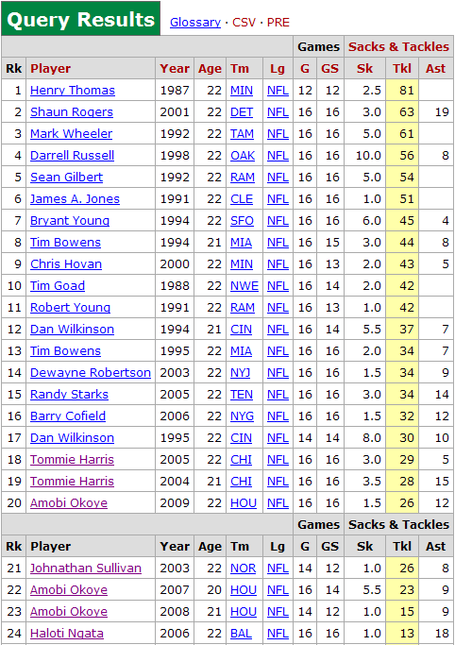 Okoye is low on tackles compared to just about everyone on the list asides from those last three. Haloti Ngata is a nose tackle, so I'm fine with throwing him out as a true comparable. Sullivan is a damn scary comparison, considering he washed out of the league at 24. On the other hand, Tommie Harris really blossomed after his first two years and became a dominant force. So obviously, we've learned that Okoye will either bust or dominate, there is no in-between!

No, what we've really learned is that there aren't too many players comparable to Amobi Okoye. I'm not sure what this next season will bring from him, and I don't think anyone who says they know is doing more than guessing. I'm cautiously optimistic, but considering the lack of talent next to him in the middle, the Texans might have problems with the run game again this year. Especially early in the season while Brian Cushing is plotting ways to destroy the NFL's drug policy.

What I do know is that what Okoye does is going to be a big key to the Texans season. As a player with an extreme amount of variation in how he could play, he might be the most important player to watch in the preseason. If the Texans get a rejuvenated season from Okoye, then the possibility of playoffs in Houston gets that much closer. If he hits the whammy again....well, three whammies and you're off the show, right?