Mythbusters: Gary Kubiak Vs. The 3-4 Defense

Using Football Outsiders' DVOA ratings, Rivers McCown takes a stab at figuring out just what kind of effect the 3-4 defense has against the Texans offense.

Share All sharing options for: Mythbusters: Gary Kubiak Vs. The 3-4 Defense

Washington Redskins, Kansas City Chiefs, Dallas Cowboys, San Diego Chargers, New York Jets, Baltimore Ravens, Denver Broncos. The Texans will play all of these teams this season. Challenging as that slate looks, it actually contains two of the easier games of the Texans season in my opinion: the Chiefs and the Redskins. But all seven of these teams carry with them a trump card against Houston.

They run the 3-4 defense, the new fad of the NFL that has tiny offensive linemen looking into the eyes of 360-pounders and brings confusion to quarterbacks by better disguising the intentions of the linebackers. There is no sugarcoating Gary Kubiak's career record as an NFL coach against this scheme: he's 6-9 against 3-4 defenses, with an astonishingly bad -148 point differential in those games. However, the caveat is that over the past two years, Kubiak has gone 5-4 against these teams. Has he improved significantly, or was this statistical noise?

Using Football Outsiders advanced DVOA metrics, further explained here, I've compiled a table of all of the games that Kubiak has coached against 3-4 teams. I pulled out the difference between the season DVOA for the Texans offense and their rating for each game, as well as the opponents defensive DVOA for that season and their rating against the Texans, and come up with some averages for each season and the course of Kubiak's head coaching career. The results shed some light on how Kubiak has done: 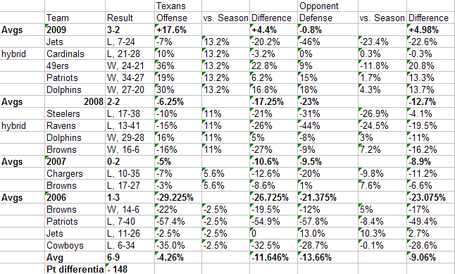 (Click to expand, Baltimore and Arizona are technically 4-3/3-4 hybrid defenses, but both of them are predicated on the concepts of the 3-4)

If you're having trouble with the concept of DVOA, just think of it as a scale of how much better or worse a unit does against the average of what other teams in the NFL have done. In this case, we're comparing the already static DVOA of what the Texans have done against the rest of the league (their season number) against the performance they had in each individual game against a 3-4 defense. The Texans, under Gary Kubiak, have performed 11.646 percent worse on offense compared to their average game over the past four years when they've played against a 3-4 defense. Opposing defenses, compared against their season average, have been about 9.06 percent better (negative numbers are better for defense) against the Texans over the past four years if they run a 3-4.

So thats that, wrap it up. Texans fans should poop their pants over the thought of going up against seven 3-4 teams this season, right? Well, it's not that simple. For one thing, a lot of the average deficit was built up against the 2006 Texans, who did crazy things such as "continually starting David Carr despite four years of evidence that he would never be a good quarterback and was terrible against any kind of pressure". For another, the Texans actually performed better, on average, against 3-4 defenses last year. Playing five 3-4 defenses, and even including the absolute traveshammockery that was opening week against the Jets, the Texans played 4.4 percent better against 3-4 teams than their season DVOA.

There is some reason to believe that the Texans rating last season was inflated. The Patriots were without stalwart nose tackle Vince Wilfork in Week 17 and at times ran a defensive front that was more confused than confusing, even mixing in some 2-5 looks. The Dolphins had already lost their nose, Jason Ferguson, for the season before the Texans met them in Week 16. The Fins were playing inexperienced Paul Soliai up front. In addition, Channing Crowder hurt himself in the first half and the Dolphins were forced to run Reggie Torbor out there for the rest of the game. Torbor's pass coverage on Joel Dreesen could charitably be called "soft."

However, the 49ers had one of the three best defenses in the NFL last year according to DVOA, a very special nose tackle of their own in Aubrayo Franklin, and the Texans dropped 21 points on them in the first half alone. In fact, both the 49ers and Dolphins game featured the Texans running up huge leads in the first half, followed by the offense stagnating in the second half while the other team got right back into the game. I'm not sure if this was primarily an offensive philosophy change or a defensive adjustment, but it sure seems like the Texans offense is still vulnerable to long periods of bad play against the 3-4.

I do think the Texans vulnerabilities against the 3-4 have been slightly overstated, and most of the really bad games after 2006 weren't against just 3-4 defenses, but 3-4 defenses that were dominant (like the '08 Ravens, '09 Jets and the '08 Steelers) against the entire league. That said, I wouldn't at all be surprised if the Texans continued to struggle a bit against the 3-4, particularly against teams that have that dominant nose tackle. If theres one thing that the post-Carr teams that dominated the Texans in a single game (-10 percent or better difference between game and season DVOA) have in common, it's a terrific nose tackle. Jamal Williams with the Chargers, Shaun Rogers with the Browns, Haloti Ngata, Kris Jenkins. If the Texans avoid some of these guys this season, by say, getting lucky enough to have their game against the Jets coincide with Jenkins' yearly rough injury, their chances will get better.

There are reasons for optimism and reasons for pessimism here. The good news is that the Texans don't appear to be a total joke against the 3-4 anymore, but I wouldn't be surprised if last year was a bit of a fluke and they wound up playing around five percent less effective against them on offense then they did on average. If you're an optimist, hope last season's improvement sticks around, because with seven games against 3-4 defenses this year, the Texans will need to keep playing well against that scheme to have a chance at the playoffs.