Hidden away at the bottom of "Canetti's Corner", Houston Dynamo COO Chris Canetti's weekly message to fans, was a short paragraph announcing the release of Craig Waibel, a fan favorite and original Dynamo.

I would like to thank Craig Waibel for all he has done for this organization during his time in a Dynamo uniform. He was not only a player, but a leader, and a standout contributor to the community. Craig's release is a symbol of the transition we are going through as a team. We wish him well in his future endeavors.

While Waibel's departure had been rumored about for week's, Canetti's message was the first official bit of information announced regarding the release of the veteran defender. Even at press time, no official press release had been issued and no statements aside from Canetti's given.

Craig Waibel will be missed by both the fans and the Dynamo staff. The 34 year-old defender was a member of the original Dynamo team which relocated to Houston after moving from San Jose. Waibel was a member of both oh Houston's MLS Cup-winning seasons and participated in domestic and international tournaments for the Dynamo. In the 2009 season, Waibel became the eighth player in Dynamo history to make 100 starts for the club in all competitions.

The defender will be remembered for his defensive prowess, power headers, and his ability to finesse crosses in from the wings. Waibel was tough on the opposition and was quick to demand the best out of those around him. He was a mentor to young players and helped rookies learn about how to play and act like a professional.

Even though Waibel made some tremendous contributions on the field, his most important work in Houston was his humanitarian work. Waibel was a three-time winner of the Humanitarian of the Year award in San Jose and extended his streak to four years in a row when he won the award in his first season as a Dynamo. His Bald Is Beautiful charity event for the "Waibel's Warriors" was a massive fundraiser the past two years and raised over $40,000 in its first year, which benefited Nick's Team and the Curing Childhood Cancer Fund.

Waibel was a fan favorite not only for his style of play and leadership, but also because he was always one of the most sincere and approachable players on the Dynamo roster. Sometimes after games, Waibel would join fans' tailgates in the parking lot and enjoy a beer with the supporters.

While no information about Waibel's future plans is known, it is possible that the defender could be joining for Dynamo assistant coach, John Spencer, in a coaching position with the Portland Timbers. Spencer is the long-rumored next coach for the Timbers and Waibel, a native of Portland, could return home and start his coaching career among his family, friends, and former Dynamo acquaintance.

Waibel, you will be missed. Everyone here at SBNation Houston and in the Dynamo fan family wishes you the very best in your future endeavours. Thanks for the great memories, memories like this... 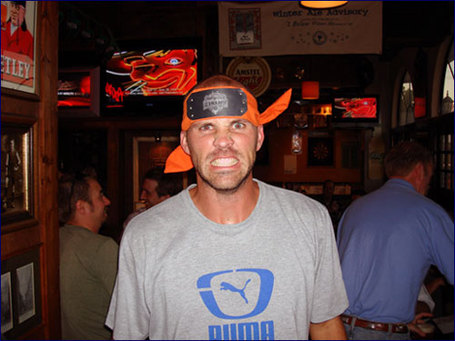