Given a full offseason of development, can Connor Barwin provide some much-needed pass rush for the Texans?

While most of the other players I've gone over in this series are pretty well settled in a starting role this year, Connor Barwin seems likely to reprise his job as designated pass rusher. He spent most of 2009 on the field as a pure third-down pass rusher, with Antonio Smith shifting to the inside and Shaun Cody shuffling off the field.

One of the Texans' biggest problems last year was getting a consistent pass rush. While I've spent a lot of the offseason throwing blame at Frank Bush for his decidedly uncreative schemes, the Texans pass rushers absolutely had problems of their own in finishing the sacks last year. Smith was the master of this, as he spent the season making "pressure that the quarterback got away from" an art form. As I have my own beliefs that the Texans will be somewhat hard-pressed to match the run defense that they got last season, I think they need a corresponding improvement in pass rushing, and while Smith should get more sacks this year on simple regression to the mean, Barwin stepping into his own would be a huge boon for the Texans.

So, what are the odds that Barwin shows improvement in training camp, takes the starting spot, and suddenly teams with Mario Williams to give the Texans a pair of bookend rushers? Here's a list of every defensive end under 24, in their rookie season, who got 3.5 sacks or more and started 3 or fewer games since 1990: 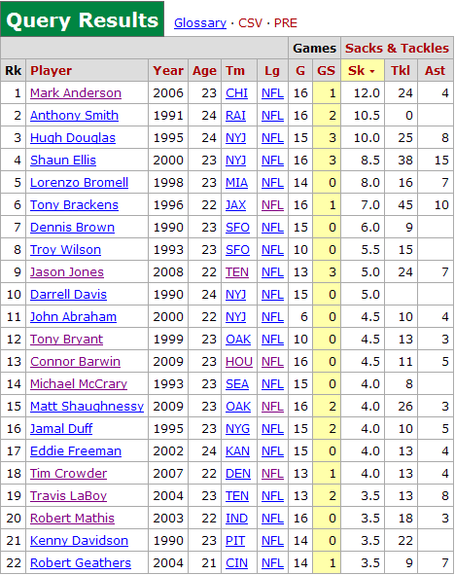 This is a decidedly mixed list of players, particularly if you're simply looking for sacks. Robert Mathis and John Abraham both had decent situational rookie years, then wound up becoming dominant forces in year two and stayed that way consistently. Eddie Freeman and Jamal Duff were out of the league after a few years. Travis LaBoy and Robert Geathers got a lot more playing time in year two and became solid, if not dominant, ends. Michael McCrary didn't see the field as a starter until he was 26, when he became a fairly stellar in his own right.

You'll notice that the younger players that show up on this list turn out to be a bit better long-term, whether they start right away or not. I think that is a point in Barwin's favor because of extenuating circumstances: he hasn't played defensive end very long at all. As someone who is still learning the position, someone who missed OTA's last season because of the University Of Cincinnati's late semester end date, it's honestly remarkable that he got to where he wound up last year. Give him another training camp and I wouldn't be totally surprised if he usurped Smith's starting job and became a stellar pass rusher. I'm not counting on it, but it's not inconceivable.

Even if Barwin doesn't get his name into the box score more often this season, he's still probably got a pretty bright future. Doug Farrar, of Football Outsiders and many other websites, offered this breakdown explaining that the flow of sacks doesn't usually start going full blast until someone has two or three seasons under their belt. If a draft pick is an investment, then a defensive end drafted early is an IRA: you might have to wait until the coach he was drafted under resigns before you can cash it in completely. If Barwin matures this season, the Texans will only be that much further ahead of the game. Particularly since they'll need every sack they can get this year to get over the hump.