Why do we make life simple for those interested in the treacherous depths of the NBA schedule? Well, because we care. That's why.

Share All sharing options for: Breaking Down The Houston Rockets 2010-2011 Regular Season Schedule

It's "The NBA Offseason: Post-Free Agency," where Tim Duncan's playful swim with whales, Darko musings and schedule releases rule the day. To add further (and entirely necessary) suspense to the drama, David Stern spread apart the schedule release over a period of two weeks, just in case we weren't biting our nails fiercely enough. But don't worry, you can finally relax.

We've got it. We've got the schedule. Yes, the whole goddamn thing.

Take a look at this nifty table below. Consider it your guide to evaluating the "toughness" of Houston's 2010-2011 slate. No months, days or times to fill space: this is all about difficulty, and it's rather self-explanatory. On the left, you can see each team that the Rockets will play: all fourteen Western Conference teams and all fifteen Eastern Conference teams. They're all there. 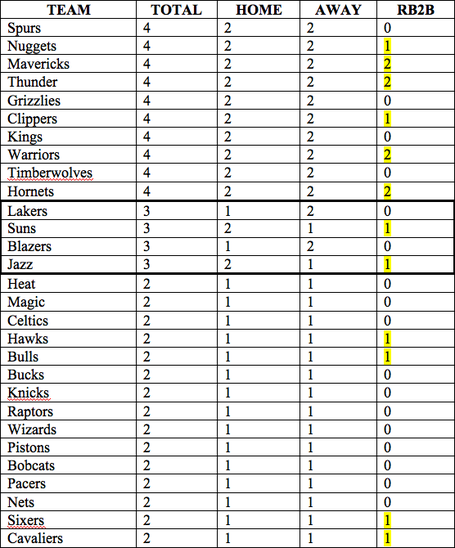 In the second column, you can observe the number of games that the Rockets will play a specific team. Notice the bolded box in the middle: among the four Western Conference teams that the Rockets could have drawn to play only three times this season (compared to the other option, to play them four times), these are the teams that they pulled out of the hat. Not too shabby, eh? Three of the four clubs - LAL, Portland and Utah - could legitimately contend for a Western Conference title, if not more. And Phoenix will definitely turn some heads.

Here, breathe a sigh of relief. We won't be seeing those powerful squads as often as we'll see stinkers like Minnesota, Sacramento or Golden State. Isn't that comforting?

If there's a silver lining, according to Jonathan Feigen, it's that twenty of those back-to-backs will involve an opponent that is playing in its second game in as many nights. So, in other words, you can consider the five back-to-backs that end at Toyota Center an even match in terms of rest, which is why those games do not appear on the chart. It's the road games that matter most.

With the chart in mind, take a look at some of the other nuances of the schedule:

The games you care about deeply, as a passionate fan, casual observer or anti-McGradyist.

You'd like nothing more than to see the Rockets topple Kobe Bryant and the defending champion Lakers on national television. On opening night, no less. Just like they did three years ago. Shane Battier still mimics the gorgeous gooseneck from his game-winning shot to himself in front of the mirror before he goes to bed every night. You know he does.

Tracy McGrady returns to Houston, this time in a Detroit Pistons uniform. I am convinced that he won't receive any boos, likely because everyone will look at McGrady coming off the bench as the seventh or eighth man and feel a little sad inside.

Nothing will ever top the brilliant simplicity of Houston's trademark "Utah sucks!" chant. It may apply to the Jazz alone, or to the entire state. We'll never know, but just for fun, we'll go with the latter.

For two straight years, the Rockets have managed to heroically take down a favored Celtics team in their own arena. Can Aaron Brooks, owner of last year's miracle TD Garden jumper, lead the Rockets to another win in Beantown?

It's going to take one hell of a performance for the Rockets to win one of these games.

I'm fairly high on Chicago. They made some really sneaky, yet solid moves to improve their depth, adding Kyle Korver and Ronnie Brewer along with big-money signing Carlos Boozer in their quest to maintain the rights to every single member of the 2008 Utah Jazz before 2016. The new guys should be comfortable with their new team come December, making this a tough win for Houston.

The January lull, another trademark of Houston Rockets basketball in recent years, should continue yet again this season, as the Rockets face Orlando (twice), Boston, Utah, Oklahoma City, Atlanta, Dallas and San Antonio all in the same month. The trip to Dallas comes on the back end of a back-to-back, making it the roughest among the many challenging match ups that the Rockets will face in January.

Houston has struggled in Utah in years past. Yao Ming has likewise struggled against recent Jazz pickup Al Jefferson. The combination of the two makes for a brutal challenge in an unfriendly environment in Salt Lake City. Oh, and it's the second game of a back-to-back. Houston faces the Lakers at Staples Center the night before, only two days removed from a Dallas-San Antonio road trip. That's disgusting.

Well, yeah. There's really no disputing the difficulty of this game. Miami's kinda/sorta/good at basketball now.

Don't Sleep On These

Teams that may look easy on paper... but could swiftly take the Rockets down hard.

You may not think the Pacers present much of a challenge to Houston, but they've actually won the previous four meetings between the two teams dating back to 2008. I've still yet to determine what exactly the Pacers do against the Rockets that is so unstoppable, but whatever it is, it works.

I'm not sure why anyone would overlook a New Orleans squad that can only get better than they were last year when they defeated the Rockets to close out the season. With Chris Paul healthy once again, the new-look Hornets can't be misjudged as a fringe playoff team. They're a legitimate scare.

Blake Griffin returns to the fold and could easily rack up big numbers against Luis Scola. The Rockets will also be coming off a presumably difficult game in Portland the night before. Should they beat the Blazers in a scrappy nail-bighter, they may not have much left in the tank for the Clips.

The Rockets are 1-5 in their last six meetings with the Sixers and haven't won in Philadelphia since 2007. With Jrue Holiday and other youngsters expected to improve this upcoming year, the Rockets may have their hands full against an athletic, hit-or-miss (a lot) bunch.

Find Tickets While You Still Can

High-octane home games that you won't want to miss.

Melo and the Nuggets come to town for Houston's season opener. You're obligated to pay fifty dollars just to give Yao Ming a standing ovation. It needs to happen.

Kevin Durant's no joke. Neither are the Thunder. They've got a good chance to win a conference title should something drastic happen to the Lakers.

Making sure you are still paying attention. Moving along to an actual candidate...

This could be a huge game for both the Spurs and Rockets as they enter the final two weeks of the season. Tim Duncan's fresh as ever, and Manu Ginobili should be back to full health, just in case you were looking for an excuse to take your girlfriend to a game. The ladies love Manu, and some of the guys do too.

VERDICT: The Rockets won't have it easy, but they'll be better off than they were last season. The road trips are aplenty, but many of them are short and sweet. There aren't any back-to-backs ending in Portland or Staples Center, and the easiest part of the schedule comes during the second half, when the Rockets typically take their giant step forward towards making the playoffs. Again, there's only one brutal road trip (Jan. 27-Feb. 2). With good health, a schedule like this should translate to 50 wins for a Rockets team hungry to return to prominence.