Return To Success? For Foster, Spotlight Is All Too Familiar

Don't make the mistake of thinking that Arian Foster's early showing is a fluke. Because if you do, you're likely to be proven wrong.

Share All sharing options for: Return To Success? For Foster, Spotlight Is All Too Familiar

Parity has spread like a wildfire amongst NFL running back corps. It takes only one game, one single standout performance for a previously little known RB commodity to find his way to stardom. Think otherwise? Consider the names atop the list of the top fantasy RB's entering the 2010 season:

How many of these guys did the average, relatively knowledgeable college or pro football fan know even existed four years ago? Maybe two? Perhaps you might have come across Jones-Drew on a UCLA highlight, or Rice during Rutgers' glory run that featured a night game on ESPN. That's probably it. And yet, you've found yourself pining for these players in your fantasy draft as if they are weighted lottery tickets.

Man, I'm really hoping Ryan Mathews slips to me at number fifteen. I had no clue who this man was until last June when he got drafted by the Chargers, but Brandon Funston threw him onto his Big(ger) Board, so doggone it, just let him fall!

To sort through the running backs list a little further would eventually serve to land upon Texans RB Arian Foster, an undrafted free agent entering his second season. He's likely to see a jump in fantasy noise after his one-hundred-yard performance against Dallas this past Saturday. Already, the Internet has been proclaiming Foster to be the next great sleeper story at RB. But for those who have followed Foster ever since his freshman season at the University of Tennessee, that's quite a ridiculous statement.

Take another look at the list of running backs above. Pick out any name from the list, any single one. A mere three years ago, Arian Foster was head and shoulders above that player. It was hardly a comparison, actually. Rice comes the closest, but he mostly ran against subpar Big East competition. Foster not only plowed through the SEC during his junior season, but he earned enough attention to warrant Heisman consideration entering his senior year.

It may seem strange at first, but Arian Foster has been here before. To him, a place in the spotlight is hardly a new venture. However, unlike most newcomers, Foster is quite versed in how quickly all of the sweetness can turn sour.

We saw a blink of Foster in 2005, his freshman season at Tennesee. He gained 879 yards on 183 carries, rushed for 223 yards against Vanderbilt and promptly disappeared from sight. Nobody earns a starting running back job for a contending SEC team their freshman season and runs for 200+ yards in a single game without having a little - okay, a lot of talent. 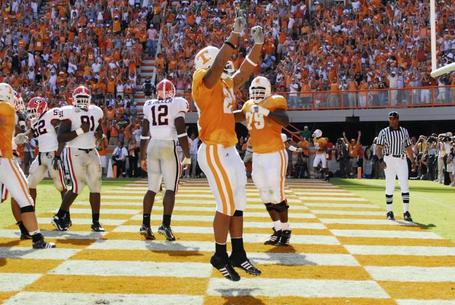 It took another year for that talent to finally manifest itself for an entire season, as Foster's 2007 campaign lifted him to elite status. He rushed for 1,193 yards on 245 carries. He was a star for the time being - a real, legitimate star. By the time the 2008 season rolled around, Foster was within 700 yards of Travis Henry's school rushing record. And then it all came crashing down.

The talent has always been there for Foster. Unforunately, so too has the unwanted (and mostly undeserved) baggage.

Take a 2006 arrest, for example. Foster was charged with disorderly conduct and underage consumption. That's not something to brag about. What was even more frustrating was that Foster was apparently trying to break up a fight, rather than start one. It was a classic case of wrong place, wrong time. This would soon become a reoccurring theme.

Ask any Vols fan if they ever heard of a particular nickname given to Foster. Throughout the course of his career, despite all of the many 100-yard performances and touchdowns, Foster's biggest weakness, unfairly shown through a microscope, became his calling card. Thus, "Fumblin' Foster" was born.

It's fitting that Fumblin' Foster has currently made his way up the Texans depth chart in part because the previous starters couldn't manage to hold onto the ball. If you were to tell anyone in Knoxville, Tennessee back in 2008 that Arian Foster would win a starting NFL RB job someday, they wouldn't be too surprised. If you were to then explain that Foster earned the promotion because of his carrying ability, they'd spit in your face and likely feel insulted.

What's even more interesting is that Foster didn't fumble much in college. As Clay Travis told Chron.com's Stephanie Stradley in June 2009, Foster's few fumbles managed to come at the very moment when a cough-up was the last thing that needed to happen. Cue Foster speaking to ESPN.com's Chris Low:

"I've had four fumbles in my last two years, and two of those were botched handoffs," Foster said. "I understand I got the tag of being a fumbler. But if you look at my fumble-to-carry ratio, I think it holds up with a lot of good running backs. It's like Marcus Allen says: If you haven't fumbled, then you haven't carried it."

He's not lying. Perhaps this is the most telling example:

Following his stellar 2007 season, Foster crumbled in 2008. He finished the season with 870 yards, and though he did so on a 4.4 yards per carry average, his reputation took a tumble. Once thought to be a early second-round pick (comparable to premature favorite Ben Tate), Arian Foster was going to have to fight to find an NFL home at all.

So what really happened that season? How did Foster go from being one of the top RB's in all of college football to falling out of the NFL Draft? As Travis told Stradley, it was the fault of the entire offense rather than just Foster.

The Texans wouldn't have been able to get Foster where they did if Tennessee's offense hadn't collapsed in 2008. So they're the beneficiaries.

Collapse just about sums it up. Genius offensive coordinator David Cutcliffe jumped ship for Duke, leaving the reigns to former Richmond coach David Clawson. Jonathan Crompton was given the starting quarterback job in preseason and failed to reach the 1000 yard mark. The offensive line was shuffled as well, leaving Foster with a makeshift offense trying to learn a new scheme under a new coach that had just come from bleeping Richmond. If anyone was frustrated the most, it was Foster, who went as far as to limit reporters to asking him questions in a made-up dinosaur language. Seriously. As much as 2008's disaster could have been Foster's fault, it really wasn't.

Wrong place, wrong time. Again and again. Oh, and to add to Foster's misfortune throughout his journey to the NFL, he injured his hamstring during Senior Bowl practice that year. Apparently, he was trying to recover his own fumble. If you're counting at home, that's five total. For some reason, teams must have decided that he was fumble prone. Or something. Either way, Foster went undrafted.

In 2009, the Texans gave Foster a chance. He made the practice squad, and the rest is history.

His forty times were never great. He was never a flashy guy. But despite the misconceptions and setbacks, Arian Foster has always been a great running back. He's always managed to take hits with confidence and even dish out a few of his own. As obvious as it should sound, his ascension to the starting job is no fluke.

This is no zero to hero story. It will never be, because regardless of how effectively he performs this season, Arian Foster was far from a zero to begin with.