The Two-Day Hangover, Week 2: Where Mario Williams Is Simply Better

Against all odds, The Two-Day Hangover is back and ready to ramble. This week, we discuss Mario Williams' super-human abilities, fantasy football and why it's far easy to pick on the Titans.

Share All sharing options for: The Two-Day Hangover, Week 2: Where Mario Williams Is Simply Better

Good evening, sir. My name is Steve. I come from a rough area. I used to be addicted to crack but now I am off it and trying to stay clean. That is why I am blogging about the Texans.

While it's bad news for those of you who took the under on Total Number of Two-Day Hangover Columns in 2010 (1.5), we are back with a second edition.  In this one, we explore the ancient Incan prophecy about Mario Williams, Vince Young, and the number three; we regale you with scatalogical stories; and we throw a bunch of other stuff against the wall and see what sticks.

Matt Schaub’s 497 yards Sunday were, as I’m sure you’ve heard, a new club record, topping the 414 Schaub had at Green Bay in 2008. His total against Washington was the 12th-best single-game performance in NFL history, and Schaub was also only 57 yards shy of the all-time single-game record (Norm Van Brocklin, 554 in 1951). Coincidentally,  No. 2 on the passing yards/game list is Warren Moon with 527 against Kansas City in 1990. On a less positive note, Schaub’s interception Sunday gave him four straight games with a pick dating back to last season. Of course, Houston won all of those games, so there’s that.

Your Houston Texans have won six straight games dating back to last season.

A brief quiz for all of you.

1. The Houston Texans are:

2. The Tennessee Titans are:
(a) Not undefeated
(b) Not in first place
(c) Named after mythical baby-eating connoisseurs of incest
(d) All of the above

And now, a word about Andre Johnson.

No matter what time we put her to bed, my two-year-old daughter comes strolling into our room at 5:50 a.m. every single day. During the week this isn’t really a big deal; we both need to be up by 6:15 anyway. On the weekends, however, this sucks. We handle it by each taking one day for Sophia morning duty and one day for sleeping in. Saturday, I was on "don’t let the toddler hurt herself" detail. My approach to this is almost always the same. I bring her into the den, turn on Nick Jr. (unless it’s Little Bill or Miss Spider’s Sunny Patch Friends, because those shows suck), give her some milk, and then curl up on the couch and sleep while she watches television.

Generally, this has worked well inasmuch as the child is still alive and possessed of the correct number of eyes, toes, fingers and other losable body parts. This past Saturday, however, my sleep was interrupted by the command "Wake up, daddy!"

I opened my eyes to find a diaper full of poop about four inches from my face. (That I had slept through this stench is somewhat amazing.) When I sat up, I saw that in addition to taking off the diaper and placing it near me, Sophia had also apparently stuck her right hand in it and then smeared it on her leg. Thirty babywipes later, she was clean, and I was trying to reason with her. (Aside: women are apparently born with the ability to reason and only lose it later in life.)

"Sophia, why did you take off your diaper?"

"Because it had poop in it."

Other than the part about how, if poop was so yucky, why in the world would you stick your hand in it, I had to admit that this answer made a lot of sense on some level.

"OK, but we leave diapers on because that’s messy, right?"

"You have poop on your face."

And I did. Don’t ever have children.

Arian Foster did not gash the Washington Redskins with the same extreme prejudice with which he’d destroyed the Colts’ defense. However, because he was so utterly dominant against Indianapolis --- as I write this, he just rushed for 30 more yards against them --- Foster’s 69 yards Sunday were enough to keep him solidly atop the rushing leaderboard. In fact, had Foster not gained a single yard yesterday, his week 1 performance alone would have him in third place on that list.

A brief list of people who are not good at their jobs.

Take that, you dead horse!

On the play where T. Williams was injured, the left tackle got to the correct spot on the field to cut Mario off. However, Trent stayed too upright, giving Mario better leverage, and was late getting his hands up, allowing Mario to get his hands inside the rookie’s shoulders. 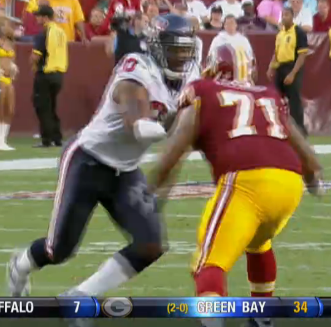 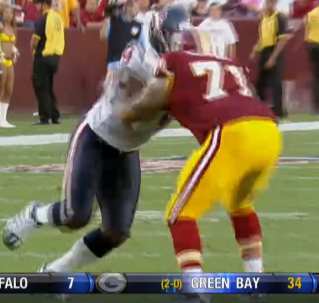 The end result was Mario moving Trent with ease --- on the second replay in the clip, it doesn’t look like Trent’s presence slowed Mario at all --- before flinging him aside and sacking Donovan McNabb for the third time. It was a rookie mistake by Trent, who learned the hard way that elite NFL pass rushers will easily exploit the kind of sloppy technique that might have been OK in college.

Speaking of those three sacks, while they were awesome, that's not even the best part. Though underrated, Mario has been the best run-defending DE in football for a couple seasons. The only thing that held him back in the pass-rush department was a combination of injury and inconsistency. Seeing how effortlessly he exploited Trent's mistake, one gets the feeling that Mario is definitely healthy and that he seems to be harnessing his natural abilities. If that’s actually the case, we could be in store for an amazing season from Mario.

Oh my, I think I am aroused.

So, I was going to do a brief rant on the bizarre idea that dinosaur bones were put on Earth by God to test believers’ faith in the Bible. I wanted to link to someone seriously arguing this position, so I went to Google. As I typed in "dinosaurs are," I got the following suggested results:

Beyond even the bizarre personnel choices made by the NFL Network, my biggest pet peeve with what is otherwise an awesome channel is that they are apparently edited by someone who is unfamiliar with general rules of punctuation.

Case in point --- and I am writing this part on Friday night --- I just saw a reference to their breakdown of "X’s and O’s" as well as "see all the week’s TD’s on RedZone." Every time someone pluralizes an acronym with "’s," the terrorists win. (And, just as I finished that sentence, I saw the scroll come by with "special" spelled "specai" and a misused semicolon. Seriously, NFL Network, if you are reading this, I will gladly take the job editing your on-air graphics.)

Can they please just stop trying to be hip by discussing fantasy football? It is a waste of time and effort for them to bother to tell me "Start ‘Em: A. Peterson, MIN" and "Sit ‘Em: A. Smith, SF." Are there actually people out there who find this helpful or insightful? Because, if so, I want to join a league with those people.

It’s really sad, but I am fairly certain that Dan Fouts cannot read and cannot recognize numbers. How else do you explain how Fouts kept yelling "Cody!" when Mario made a play? Beyond just being basically stupid --- which he is, with no doubt --- Fouts was consistently awful in identifying which player made a play. I don’t ask for much. Hell, I can even live with Steve "Big Time Players Make Big Time Plays In Big Time Games Unless They Fail Big Time on Big Time Downs" Tasker. But, at a minimum, I ask that the color commentator be able to differentiate between, say, Zac Diles and Mario Williams. Is that so hard? (Hint: Diles is the one who is the most cost-effective player in the history of modern sport.)

So Rackers hasn’t missed now that I skip Texans FGs to go pee.

From Tim of Battle Red Blog:

This TEN ass-kicking, complete with QB controversy, is like Christmas in September.

In cross-blog-synergistic-cross-promotion news, some combination of Tim, bigfatdrunk, Rivers, and yours truly will be on Battle Red Radio with Evan Tuesday night. It’s like the greatest Texans-themed podcast ever recorded on September 21.