Today the front office of the Houston Dynamo (finally) officially announced that the groundbreaking ceremony for the team's new downtown stadium will be held next Saturday, January 29, at 2pm.

Earlier this week, Dynamo President, Chris Canetti, discussed the progress of the stadium situation in "Canetti's Corner," his weekly address to fans, saying, "We to hope to nail down a date for the stadium groundbreaking very soon. There are a few final pieces that need to come together, but I expect that things can get done within weeks. Once they do, then we'll quickly move forward with a ceremony and then construction. Fans will be invited to attend the groundbreaking ceremony, so please stay tuned for details. A grand opening in April of 2012 remains the target and is realistic."

Since then, the situation has evidently improved and a date was finally nailed down. Right now, few details about the groundbreaking ceremony are known, but more will be coming soon from the Houston Dynamo.

This is an exciting day for all of the Houston Dynamo fans who have waited five years for the idea of their very own stadium to become a reality.

Now, let's get out those silver-plated (orange, maybe?) shovels! 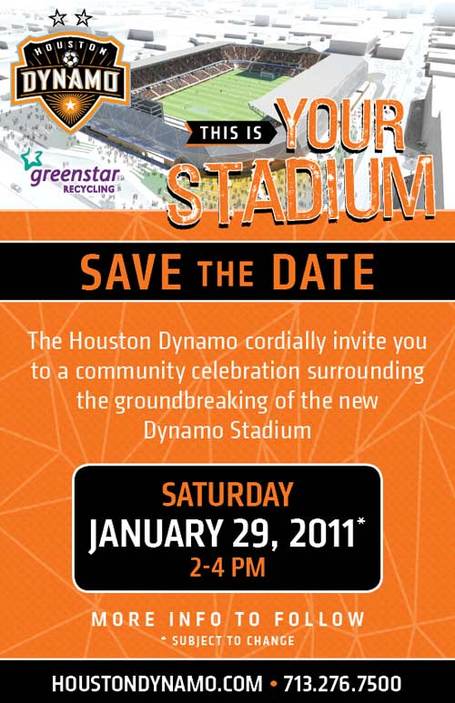