On opening day, who will start for the Houston Dynamo? 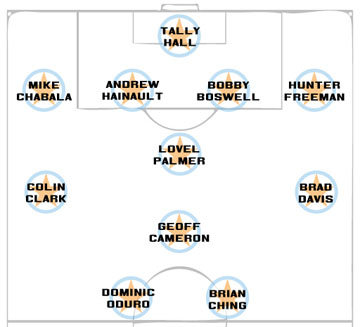 It was known all offseason that there were three key areas that the Houston Dynamo needed to fix; a weak defense, goal-scoring forwards, and an impact central-attacking midfielder. While the expected starting XI halfway addresses those concerns, the updated roster shows that two of those three areas have been fixed. With regards to the starting line-up, there are a few things that are certain: Brian Ching will start when healthy, Brad Davis, Lovel Palmer, and Geoff Cameron are locks in the midfield, Bobby Boswell will be the starting centerback, and Tally Hall will start in goal.

The other five positions are still up in the air. Until Colin Clark returns to full fitness, Danny Cruz will likely start at right wing with Corey Ashe being brought on late in games. The only wildcards with this position are whether or not Francisco Navas Cobo, Josue Soto, or Alex Dixon are used at some point in the season and if rookie defender Kofi Sarkodie's speed and attacking instincts will land him a substitute's spot in the midfield.

Most of the team's questions heading into the offseason were aimed at the second worst defense in the league. Dominic Kinnear and co. answered those questions after offloading some of the older players in favor of younger, more athletic talent. The departure of Richard Mulrooney, Adrian Serioux, and Ryan Cochrane made room for Hunter Freeman, Jordan Graye, Jermaine Taylor, and Kofi Sarkodie. Eddie Robinson, Andrew Hainault, and Mike Chabala are all still around, but there is competition for the starting spots. Jermaine Taylor, with his experience and pre-season displays seems poised to join Bobby Boswell in the center of the defense. Hunter Freeman looks to have taken the starting right back spot from Hainault, though strong showings from Sarkodie could see Freeman moved the left back position, pushing 26 year-old Chabala to the substitute's bench. Robinson and Hainault are likely to be starters when the schedule becomes more congested, and will bring experience and the desire to become regular starters with them. Experienced defender Graye is a bit of a wildcard, but will continue challenging for a spot.

The (temporary) retirement of Pat Onstad opened the door for young ‘keepers Tally Hall and Tyler Deric to fight for the starting spot between the pipes. Hall won the fight, but Deric proved he has the skills to pressure Hall and be a goalkeeper for the future. The acquisition of Evan Newton brings depth to the goalkeeping group, though the first-year goalie is not likely to see too much action.

The only other point of real debate left is who should start alongside captain Brian Ching. While Oduro may not be a popular choice, the Ghanaian has MLS experience and is the only forward with true speed. Oduro may be best suited as a substitute who can stretch the defense, but I would not be too surprised if Kinnear starts the fast forward at the start of the season. Now, if Oduro doesn't start? Well, that's when things get really fun. After his hattrick against SMU in the preseason, rookie Will Bruin is making a strong case for a starting spot. It's not too often rookie players are relied upon so quickly, but Coach Kinnear has to like what he sees in the young forward. Jason Garey, the former Columbus Crew forward, also has impressed in preseason and could fill in as a starter when needed. The one forward who has failed to live up to expectations (two seasons running now) is Cam Weaver. The lanky forward has been inconsistent, at best, and continues to frustrate fans. Weaver seems to be one of those players who can play well when he gets his confidence, but he must find that confidence somewhere quickly if he wants to see minutes for this Dynamo team.

Which new player(s) will have biggest impact?:

This has to be a three-way toss up between Geoff Cameron, Will Bruin, and Jermaine Taylor. I think Taylor may edge out the lead because he can help shore up what was a terrible defense that cost the team multiple games. Far too many times the Dynamo gave up points late in games last season, but it looks like Taylor could be the player who, alongside Boswell, tightens things up and gets the defense back to its hardnosed style of years past. Bruin looks to be one of those rare rookies who comes into the league and can immediately make an impact. He was an unexpected pick-up in the SuperDraft and has shown nothing but class and poise. On top of that, he is scoring goals against MLS opposition from open play, something the Dynamo struggled with last season. I know Geoff Cameron isn't a new player (and I hate when people say getting someone back from injury is "like a new signing"), but Cameron's return from his PCL injury last season could make or break Houston's season. Cameron has looked good in preseason and seems more comfortable in his attacking role. He will have to create attacking runs and learn how to control the game from the midfield, but, if he can do that and score more than a few goals, he will be the biggest impact player this season.

Which player(s) loss will be felt the most?

It may be a bit harsh to say none, but that really seems to be the case with the Dynamo ahead of the 2011 season. The departure of a number of older and ineffective players helps this team in a number of ways. First, it opened up valuable roster spots and even more valuable salary cap space. Secondly, it gives the younger guys an opportunity to show their skills and fight for playing time; competition always brings out the best in players. And lastly, it created an environment where some of the young guys from the SuperDraft, Supplemental Draft, and Dynamo Academy system can come in and get actual playing time.

At what point is this season considered a success?

After last season's disappointing record and missing the playoffs for the first time in franchise history, the 2011 season will be considered a success if the Dynamo can make and challenge in the playoffs. Now that the team is in the Eastern Conference, along with the new playoff structure, the Dynamo should have little problem making the playoffs, but only time will tell if the team has enough to challenge and make a MLS Cup run.
Ultimately, the most important mark of success for this season will be if the team can win games and create a buzz ahead of the new Houston Dynamo stadium opening in 2012.

Whose performance do you think will be most indicative of the season as a whole?

Brad Davis, no questions about it. The veteran winger is the key to Houston's attack. In the offseason, Davis scored goals from set pieces, the penalty spot, and open play, along with creating a number of assists. Whenever he was subbed off so that Coach Kinnear could take a look at other players, the Dynamo offense looked slightly impotent and significantly robust. If Davis can stay healthy, then the Dynamo have a real chance at scoring goals and winning games. If he goes down with a season-threatening injury the way Cameron did in 2010, the it could be another painful season for Dynamo fans.

Can Geoff Cameron be an effective central attacking midfielder?

Quick answer, yes. Long answer, of course Geoff Cameron can be an effective CAM, he just needed time to get adjusted to that role. Often I hear fans and writers alike debate where Cameron should play and what his best position is (defense, in my opinion), but he has shown that he can be an effective player in the midfield. Cameron has shown attacking instincts before, has a solid shot, is learning how to create space and how to direct the midfield. All of that is a lot to ask of player who has been asked to play CDM, RB, LB, and CB, which is why it has taken so long for Geoff to adjust to his role as the team's central attacking midfielder.

Cameron's importance to Houston's offense was most obvious last season when he was out with injury. The team struggled to create offense through the middle of the pitch, opting to play it through the wings ending with wild, off-target crosses leading to wild, off-target shots. This could be Geoff's real break-out season, and I think the he and Brad Davis will compete for the team's MVP honors.

I know this question will anger longtime fans of the Dynamo, those who feel that the team's captain can do no wrong and should play every minute of every game, but I think it has to be asked. Last season Ching picked up a series of injuries, culminating in a hamstring injury that forced him to miss a spell of games and, likely, was the prime reason Bob Bradley did not take him to the World Cup in South Africa.

There's no denying that, when healthy, Ching is a fantastic player and is the lifeblood and leader of the Dynamo. The problem is, he's not 100% healthy all the time, and is looking like he won't be 100% fit most of the time. It's only preseason, but Ching already has picked up two hamstring injuries, has missed a number of practices, scrimmages, and friendlies, and is set to miss the season opener against the Union. If the forward continues to be plagued with hamstring issues, then questions will have to be asked about Ching's health and if something structurally is wrong with his hammies.

So what's the answer to the question? Well, I think Ching should start, when he is 100% fit, but that means he cannot and will not start every game. If anything, I think that Will Bruin and company have shown that they can score goals and win games with Ching out of the line-up, something that should comfort Coach Kinnear. So what does that mean long term for Ching? Well, I think his time this season has to be limited to the big games. Think of it as a role like Ryan Giggs of Manchester United. The 37 year-old winger still has skills and influences every game he plays, but at his age he cannot play every single game. So, he is played in major games and in times where injuries have thinned out the squad. Is it hard for a competitor like him to not start every game? Sure, every major athlete wants to play every minute of every game, but at some point, as both an aging player (or an injury-plagued player) and as a leader, you have to recognize that you are more important in certain games and at certain times at 100% than you are at 75% all the time. So, the big question is, can Brian Ching handle not starting every game?

Where will the Dynamo finish the 2011 season?

Given the shift to the Eastern Conference, it looks likely that the Dynamo could finish in second place, probably behind the New York Red Bulls and ahead of a resurgent DC United or the rebranded Sporting Kansas City.

If Will Bruin's play during the offseason is any indication of what he can do week in and week out, when it all actually counts, then he very well could compete for the Rookie of the Year award.

Thanks for checking out my thoughts on the Houston Dynamo ahead of the season. Feel free to discuss any points that you agree or disagree with and to come back at the season and (hopefully) applaud my terrific insight and outstanding predictions.

As always, check back here throughout the weekend for updates on the Dynamo's season opener against the Philadelphia Union and any team news that's available.