No, we're talking about the Houston Cougars. Not like, you know, the other kind. Sheen joined the Cougars baseball team for batting practice and had some fun with the players, who were in town after a game against Stephen F. Austin was cancelled due to inclement weather 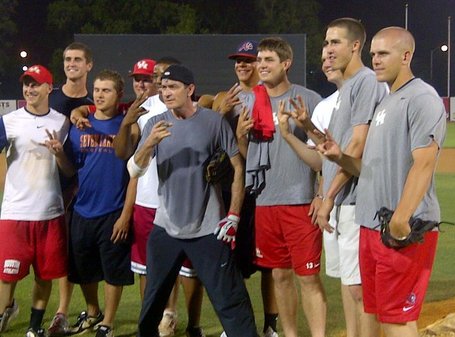 "Charlie was outstanding with our players," said Whitting, who is a fan of Sheen's hit TV show. "He spent a lot of time with them. Very humble. He took BP for 45 minutes to an hour and chased some fly balls. I was impressed with the interest he took in our kids."

"He's always been a favorite of mine and it was awesome that he came by and spent some time with us," Whitting said.

One can only hope that it inspires the Cougars to greater heights, as they are floundering near .500 thanks to a very tough schedule. Well, one at least hopes they do better than Sheen did as a stand-up comic.