Hey y'all LSU is playing football again next season.

Share All sharing options for: LSU Football Schedule 2013: A Quick and Dirty Reaction

It's never too early to start thinking about next season, is it? Hell, Auburn started weeks ago. LSU unveiled it's 2013 schedule today.

Here's a red, yellow, green look at the schedule: 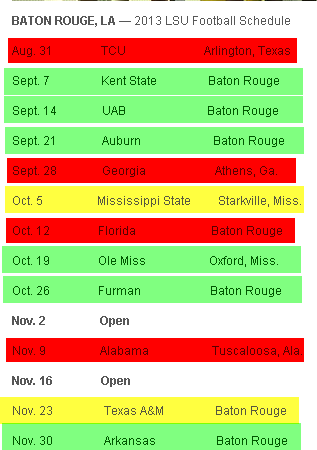 Okay, maybe I'm being harsh on Arkansas and the trip to Oxford is almost always tricky. Auburn, well, meh. I don't apologize for listing them as a scrimmage.

I like LSU opening with TCU. I think we've seen this year what happens when you open with an uber cupcake. TCU means the team needs to be focused out the gate. The trip to Athens should be a challenge, as usual.

Perhaps most interesting to me? At least three of these schools could be looking at new head coaches next season (Auburn, Georgia, and Arkansas). I wouldn't say it's likely, but if Chizik limps out the rest of the schedule, Georgia loses another game or three, the leash is going to get awfully tight right? Oh should I have said four? #NickSaban2Cleveland. Knowing our luck, Saban would take the Cleveland job, Gary Patterson would go to Alabama and TCU would hire Houston Nutt for shits and giggles.