How can LSU Passing Game Attack the Alabama Defense?

Share All sharing options for: How can LSU Passing Game Attack the Alabama Defense?

Attacking the Alabama defense is a tall task. Virtually everyone fails. If you wanted to point to one major mismatch this weekend (assuming the LSU special teams get back to playing like they did in 2011), it would be the LSU offense against the Alabama defense. Despite losing significant pieces (Hightower, Upshaw, Kirkpatrick and on and on and on), the Tide once again field the nation's preeminent defense. They are equally adept at both run and pass defense. Lose your best corner and best pass rusher? No problem! It's plug and play in Tuscaloosa with a talent pool so rich in resources, they could probably fuel a fleet of Mack trucks.

So how could an offense as meager as LSU's hope to attack such an all-consuming force? Well, the answer is multi-pronged, but a good starting piece would be to review Steven Godfrey's excellent piece on "How to Beat Alabama: All-Access Look at Preparing for the Tide." Seriously read, or re-read that piece, it's excellent work. Here's a few particularly illuminating portions:

Before the snap, they'll shift and/or motion their backs and ends for a variety of reasons, according to Taggart -- it disguises their plays, it sometimes exposes if a defense is showing man or zone and it allows for successful, simple plays to be run multiple times without a defense noticing before the snap.

The more talented Bama defense will have to pick up new assignments on the fly, sometimes at all three levels. Bama's adjustments also come in from their safeties, according to the WKU staff, so quick "Shotions" before the snap could beat the message to the defensive line. To put it bluntly, it can confuse the hell out of a normally unstoppable monster across the center.

But the main portion I want to focus on is this:

The offensive staff agrees early on in the week that the Alabama linebackers will determine how WKU passes and from what look, especially on third downs. Despite their secondary's youth, solid coverage deep is a given in Bama's 3-4, but a tendency has been spotted in the obvious: the linebackers are fast, and the Tide likes to exploit that. It's a wonderful luxury for defensive coordinator Kirby Smart to have linebackers who can show blitz and drop deep after the snap because that allows the safeties to move around unexpectedly and wreck passing routes. This is often disastrous for a quarterback trying to find an open receiver for a long completion, but WKU's bread and butter is the tight end, especially in man coverage.
Taggart and his staff have a method of attack in the air. When Bama's linebackers drop deep, Western will throw shallow, letting physical guys like Doyle grab a short completion and turn upfield to potentially meet an undersized corner they can run through. It's not sexy at all, and to the amateur eye it will look like a safety-valve type play -- as if Jakes had checked through his reads and went with a last resort -- but it's precisely the kind of methodical rhythm Taggart wants in his offense. His oft-repeated offensive goal is "at least two first downs, and every drive with a kick" (PAT, field goal or punt, just not a turnover). It also allows Doyle, the "second quarterback" of the offense, a lead role.

The LSU passing game has yet to develop any sort of rhythm or consistency. Mettenberger's play is wildly erratic, often tied to his issues with accuracy. Wide receiver drops and penalties further hinder the development. It's difficult to see what sort of plan the coaching staff has for him. At times it looks as if they restrict him, limiting his reads to half the field and even shying away from play action so he won't turn his back on the defense. At other times they seem to be forcing the issue, as they did against Texas A&M, throwing it 13 times on 1st down. The passing game hasn't evolved naturally and seamlessly.

Against Alabama, there is potential for disaster in this regard. As good as LSU's running game can be, a one-dimensional attack will not give them the best chance to win. It will be important, early, to find controlled, smart throws for Mettenberger. Doing this requires LSU utilizing facets of the passing game they have not exploited throughout the season, namely throwing to the backs and tight ends. The screen game is one area the LSU coaches should hope to use to slow down pass rush and get the Alabama defense off balance. But even slight variations of this can prove to be effective.

Here's one look Tennessee gave that LSU should look to exploit: 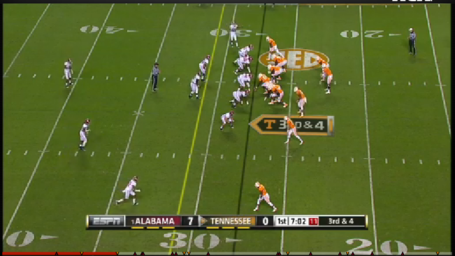 Take notice to how the Alabama defense is aligned. Pre-snap, it appears as if there are eight in the box, with potential pressure coming. The Tennessee WR lined up just off the left tackle, motioned from right to left. As a result, the Alabama's outside corner on the right sinks down to take the TE. This is a prime example of a a simple motion giving the offense a favorable look. 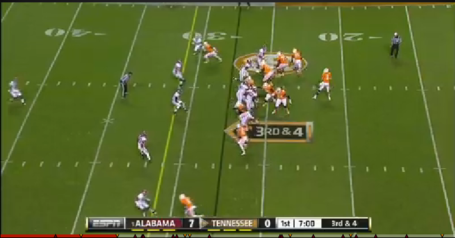 At the snap, you'll see the the middle two Alabama linebackers, who were previously 3 yards off the football, take deep drops. Alabama does bring a blitz off the left side here. However, the pocket is established, so Tennessee is prepared. The TE is going to run straight up the field, which winds up being a little bit of a pick route on that inside LB. His route also draws that corner, which leaves a HUGE vacancy on the right side of the field for the running back to slip out to. 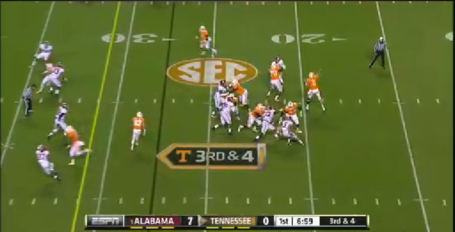 The result is a 26-yard gain, on a "check down" style of play. When the Alabama linebackers take deep drops, there is opportunity for LSU to work the underneath passing game. Spencer Ware and Jeremy Hill are both competent pass catchers. Their abilities should not be wasted due to lack of use. With all due respect to Marlin Lane, who is a good SEC back, a play like this to Jeremy Hill could lead to a touchdown with his speed and vision.

LSU, unfortunately, does not feature good receiving TEs. Clement battles the drops. Jacobs shows good mitts, but he's not been utilized enough for us to know fully what he's capable of. Although Jacobs lacks great speed, he's the type of big, safe target that Mettenberger should exploit against Alabama. Controlled, easy throws that can establish rhythm and hopefully draw Alabama out of the Cover 1 just enough to allow a shot over the top.

The task is tall, but LSU has the personnel to attack the Alabama defense... if they employ it correctly.