Nick Saban's statue now has a tail. It's the tail of a Tiger. The Tigers play Saban's Tide this weekend. Coincidence?

Oh, those pranking SEC fans. Unless Nick Saban's statue along the University of Alabama's Walk of Champions is a therianthrope, some fun-loving, death-wish-having LSU fan took it upon themselves to play a game of Pin The Tail on the Saban. 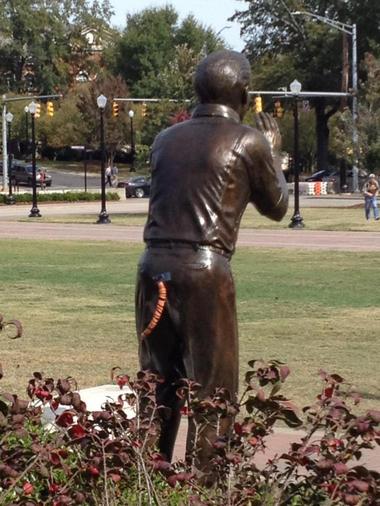 No. 5 LSU and No. 1 Alabama play Saturday night in the latest Game of the Century of the Year. Safe to say these two teams know each other well, as it's the third time they'll have met in the last 12 months. The Tigers won last year's annual meeting when they and the Tide were the two top-ranked teams in the nation. The win was part of an undefeated regular season and SEC title on the way to a BCS national title game meeting against ... Alabama. The Crimson Tide won the rematch and all the marbles that came with it.

Also, Saban used to coach LSU, which you may have heard about. There are bad feelings here.