Friday night, the Astros finally unveiled their new logo and uniforms, as they transition to the American League.

The new Houston Astros logo was one of the worst kept secrets, as it was known weeks ago what the new logo would look like. Plus, MLB.com even released the new look on their own website 30 minutes before the official release to encourage fans to buy the new merchandise.

The Astros have now officially released their new look at their launch party on Friday night, and are making a big deal of the changes. The twitter feed of the Astros has been posting photos of the new design this evening.

Here is a nice layout of the three Astros uniforms via @CoryHepolaCSN: 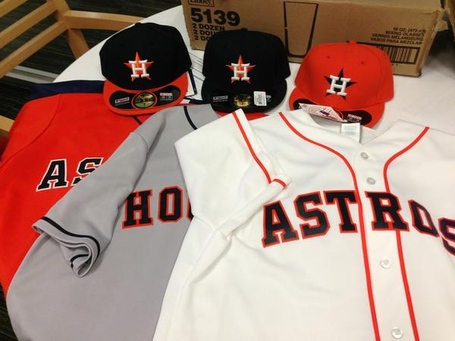 These uniforms bring back both the old star and H logo design that the team used years ago, but the uniform is fairly basic and has more of a modern look to them.

The Astros are also brining back the rainbow uniform look with their batting practice jersey's.