As our friend-in-the-field Holly Anderson of SI points out, the new Twitter avatar of Texas A&M head football coach Kevin Sumlin is anything but generic or understated. It's only after you click on his profile and then enlarge his avatar photo do you realize he's not actually rocking an official A&M leather bomber jacket (with an accompanying SEC patch, we're sure): 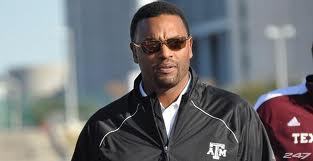 Not for nothing, and certainly the first-year Aggies coach is slightly preoccupied resurrecting the Aggies' reliably collapsible defense and bracing for a move into the SEC West, but we're down for the biker / fighter pilot / rogue cop in a 1980s action flick look.

Sounds like the title to the perfect Sumlin breakout vehicle, co-starring a hotheaded young Christian Slater, and PLAYING BY NOBODY'S RULES BUT THEIR OWN.

For more Texas A&M coverage, be sure to check out I Am The 12th Man and SB Nation's college football page.