SB Nation's Andrew Sharp has a very well-done power rankings list for the London Olympics so far. Of course he ranks Phelps as No. 1 because the 20-time medal winner has left us no choice. He's the man.

But it's worth noting Gabby Douglas' smile on Thursday, the emergence of Allison Schmitt through the shadows of teammate Miss Franklin, who along with Ryan Lochte could be considered one of the disappointments in London.

That, and a Kobe Bryant/Pau Gasol photo that only gets taken in London. 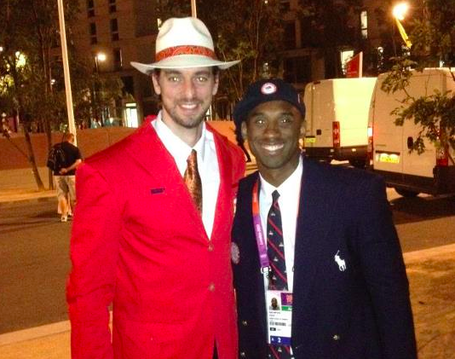 A little different from the Hollywood style but it works where they are now. Seriously, with Americans going into Friday's competition with the medal lead and the end of swimming competitions approaching us, there's a lot to take in already.

Read more of our Olympic coverage at SBNation.com.