Can someone please explain to me how Jeremy Lin has managed to become an international celebrity, land a $25 million contract, but still can't find a bed to sleep in while living in two of the four biggest cities in America?

We all know the back story of Lin sleeping on Landry Fields' couch last season with the Knicks, when the young point guard was uncertain of his NBA future and traveling on a rigorous lockout infected schedule. Lin crashed on his brother's couch at some point as well.

It was inspiring for many to see him go from being just a regular guy trying to make it, to commanding the world's attention within a week.

Months later, Jeremy Lin is still having trouble finding a bed to sleep in, despite the fact that he CLEARLY has more options than he did before. Let's try to do this without spelling it out, eh?

This, from Chandler Parsons' phone: 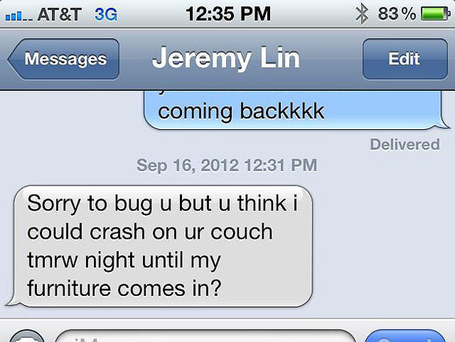 So answer the question...can i? Haha RT @chandlerparsons: Glad all that @nba money didn't change him @jlin7. twitter.com/ChandlerParson…

If Parsons is real friend, he'll advise Lin to seek better options than Parsons' couch. Everything is bigger and better in Texas, and Houston just so happens to be the biggest and best city here, especially if you out looking for a bed to sleep in at night.

Figure it out, Jeremy.

Read more on the Rockets at The Dream Shake and SB Nation Houston.