Steve Sarkisian is a Ridiculous Person

Share All sharing options for: Steve Sarkisian is a Ridiculous Person

ICYMI, Steve Sarkisian wrangled up an actual Tiger for practice this week. In the midst of game plann... SARK BROUGHT A LIVE TIGER TO PRACTICE.

Is there really even any logic to this? OF COURSE NOT. What logic could there be to bringing a 16-month-old, 300-pound Tiger to the sidelines? Oh I get it, they are playing the Tigers of LSU this weekend. What better way to teach your players how not to fear the Bayou Bengals than to BRING ONE TO PRACTICE. Screw game planning. Forget the extra hours in the film room. Who needs to review the playbook one more time... there's a live Tiger at practice! I drafted a quick list of things more logical than bringing a live Tiger to practice:

1) Talking to a chair.
2) All of Kim Kardashian's relationships.
3) Family Feud.
4) Sporks.
5) LITERALLY EVERYTHING EVER.

In a land of excessive, absurd motivational tactics, somehow Sark takes the cake. Coaches will do anything in the name of competitive advantage. Steve Spurrier made his players listen to "I Hope You Dance." Pete Carroll ripped his shirt off and joined in some type of chant. Lane Kiffin existed. Satan himself embodied human form: Nick Saban. All in effort to preserve the age-old Al Davis moniker of "Just win, baby." Somehow, all of these make more sense than BRINGING A LIVE TIGER TO PRACTICE.

Clear Sarkisian's intelligible, nuanced approach to motivation and game planning will be just the edge the Huskies need to score the upset in Baton Rouge this weekend. The odds remain stacked against Washington, but sources confirm that the extra bit of LIVE TIGER motivation may push them over the edge.

When asked to explain, Sarkisian explained... WHAT THE HELL WHO GIVES A SHIT THERE'S NO WAY TO EXPLAIN THAT.

Have you read the official Washington Huskies release about this? Boy, it's a treat.

At one point, offensive lineman Dexter Charles stuck his gloved hand in the bars of the tiger's cage, drawing "Whoas!" from his disbelieving teammates.

Well, that ranks on the list of brilliant ideas.... Headlines, now!:

Of course, while this may be an indication that Sark belongs on the crazy train, it's also clear he's an all-around nice guy, right? I mean, he went out of his way to arrange for a a LIVE TIGER to come to practice, all for the amusement and motivation of his players. What a guy. What. A. Guy. Then this happened: 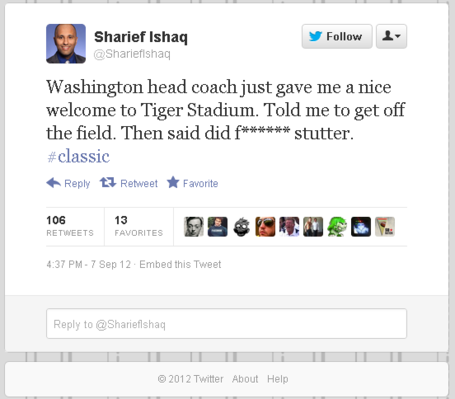 Of course, Mr. Ishaq seemingly just wandered onto the field. With a camera. I suppose Sark's anger can be justified... But I don't care to rationalize a man who brought a LIVE TIGER to practice for shits and giggles. WHO DOES THAT? Steve Sarikisian does it, which is why he is this week's Ridiculous Person.

For more on LSU football, check out And The Valley Shook, Team Speed Kills and SB Nation's college football page.