The Final Four gets going Saturday. Here's your complete schedule and updated bracket for the tournament.

The 2013 Final Four is set to tip off on Saturday. Despite having only two games on the slate, there's plenty of interesting basketball left to be played.

Louisville vs. Wichita State is the first game on the slate. The Shockers are the talk of the town after knocking off Gonzaga and Ohio State to make their first Final Four since 1965. Louisville is in the semifinals for the second year in a row.

Afterwards, Michigan and Syracuse will face off in what promises to be a fascinating matchup between a high-powered offense and stifling zone defense.

Here's the complete schedule for Saturday:

Both games will streamed online at March Madness Live 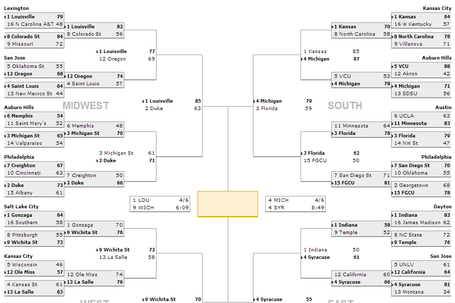 • 10 things you should know about the Final Four

• The 5 things that will decide Louisville-Wichita State

• Living and playing basketball with cancer

• Andrew Wiggins is the anti-LeBron