Lets Talk About This Picture Of Carlos Lee

Share All sharing options for: Lets Talk About This Picture Of Carlos Lee 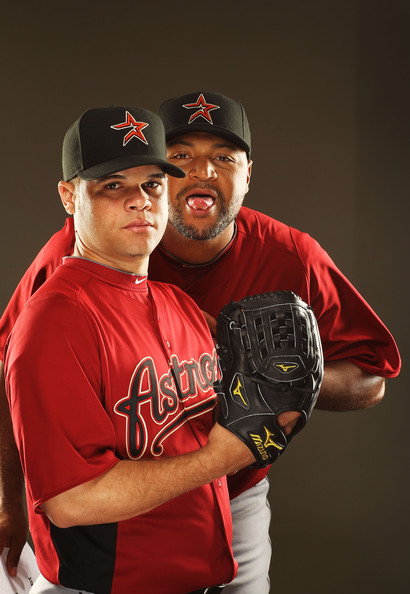 I can't quite put my finger on what is going on here. My top five (safe for work) guesses would look something like:

1) Carlos Lee is making fun of Wandy Rodriguez because he still makes more money than him.
2) Moving the three feet the photographer asked him to has left Lee fatigued, and this photo was snapped before he fell on the ground.
3) Lee's saliva is acidic, and once he hits Rodriguez with it, he has a tasty treat.
4) Who wants a scooby snack? Who's going to be a good boy and get his picture taken?
5) Rodriguez's wind-up now produces a Pavlovian reaction that forces Lee's  tongue out. The reason the Astros did this was so that Lee's saliva could coat the ground, thereby lowering the grass level and making Lee less likely to trip since it's hard for him to get his feet elevated more than four inches from the turf.