The Houston Astros are getting a new logo for their move to the American League, but the sports chain store Academy put some merchandise on sale earlier than they were suppose to. The release date was Nov. 2, but it was somehow put on sale on Friday.

The logo goest back to the orange star with the 'H' in the foreground, and is very similar to the logo the Astros used with their rainbow style jerseys that also mirrored the color seating of the Astrodome.

Here is the logo on a t-shirt that was for sale sometime on Friday: 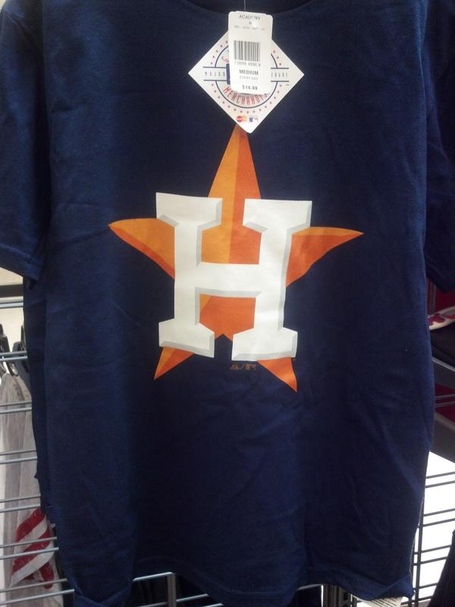 This logo is just a small sample of a large Astros logo redesign.

Since the item was released early, Academy did release a statement apologizing for the mix up:

"We express our apologies to Houston Astros fans, our partners at the Houston Astros ball club, along with Major League Baseball for inadvertently releasing the new Astros t-shirts in limited quantity," says Rodney Faldyn, Academy Sports + Outdoors CEO & President. "We take pride in our ongoing partnership with the Astros, and this oversight is not our standard business practice. We are looking forward to celebrating the official jersey launch with the Houston Astros on November 2, 2012."

Some lucky Astros fans were able to snag the new look logo early, but since the error was noticed, all of this merchandise has been taken down. The rest will have to wait until Nov. 2 to get their hands on merchandise with the new logo.