Astros bring back Orbit to be their mascot

With the Astros going through a rebranding process, they are bringing back Orbit to be the team's mascot.

Share All sharing options for: Astros bring back Orbit to be their mascot

The Houston Astros are going all out in updating their look as they make the move from the National League to the American League. They are also going back to an old fan-favorite mascot with the return of Orbit.

The news of Orbit coming back as the teams mascot, just like everything else surrounding the redesign of the Astros, was leaked on Wednesday night. On the Astros website there was a place to request the appearance of Orbit.

At the Astros uniform launch party Friday night, they made it official that Orbit is replacing Junction Jack as the teams new mascot.

Here is a photo or Orbit from the team on Friday night, and it only shows the back of Orbit:

From the looks of it, Orbit has not changed one bit. Here is what he looked like before: 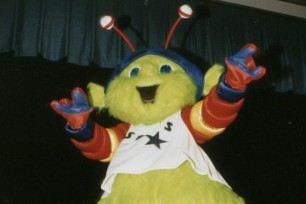 The only change is the uniform that he will be sporting.