PHOTO: Roger Clemens 'Evidence' Comes Out Of A Miller Lite Can

Share All sharing options for: PHOTO: Roger Clemens 'Evidence' Comes Out Of A Miller Lite Can

Former Internal Revenue Service and BALCO investigator Jeff Novitzky could present the key testimony in the event that Roger Clemens is convicted of perjury. With Wednesday's events, it seemed as though Clemens could be on his way to dodging the charges for a second time.

But Thursday, what only appears to be DNA evidence of Clemens' HGH and steroid use obtained by Novitzky from Clemens' former trainer Brian McNamee during the doping investigation was presented and explained to the jury. The so-called evidence comes out of a Miller Lite can and contains syringes, vials and possibly stained cotton balls among other things. Take a look. 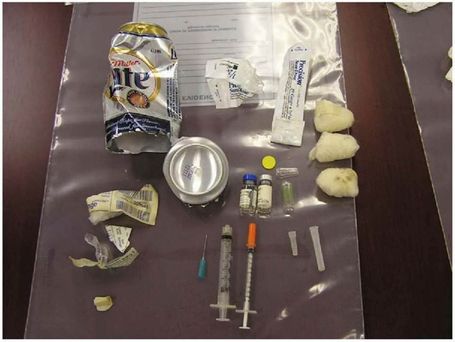 It's been a fun day at the courtroom, at least from what we can tell from the live-tweeting. The day started with Clemens' attorney Rusty Hardin spilling coffee on what has to be a helluva expensive suit. Also, the back-and-forth of the animated Hardin and the calm, cool and collected Novitzky has provided the drama this trial was lacking prior to Wednesday.

Read more about the Clemens trial at our StoryStream.

Roger Clemens Trial Verdict: Not Guilty On All Counts