UConn Vs. Butler -- Houston's Job To Pick Up The Slack For Huskies Fans

If you buy something from an SB Nation link, Vox Media may earn a commission. See our ethics statement.

Share All sharing options for: UConn Vs. Butler -- Houston's Job To Pick Up The Slack For Huskies Fans

I attended the Final Four on Saturday, and was mostly pleased with the results. The arena was packed, even if it did take some hardcore scalping to get it there, and while the UConn-Kentucky game was pretty ugly, Houston was granted a pair of games that were tight into the last media timeout. That's about all you can ask for.

Unfortunately, one part of the arena was not packed: The UConn student section. Yes, that's right, the favorite to win tomorrow night's title is not likely to fill their fan allotment. VCU and Butler both traveled pretty well, relatively speaking. Kentucky fans dominated Reliant Stadium, making up probably 40-45% of the total crowd. Then there was the Huskies, who couldn't even fill out their own section. Have a look for yourself, via blurry camera phone from the nosebleeds: 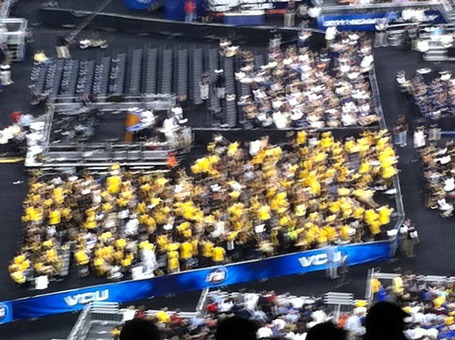 With Kentucky now out, ticket prices are getting slashed dramatically. Stubhub tickets were at $60 last night, and have fallen steadily all day. The cheapest now? About $33 as I write this. Probably lower now.

But why even bother with those? Look at some of the stories on the ground. While people definitely filled the place up, they were getting excellent deals from scalpers. Expect the same thing to happen tomorrow night, especially now that Kentucky is gone.

Butler filled their student section, and they brought a pretty good assortment of people with them for their class of school. We would be making contraction jokes with Connecticut if it were, say, the Tampa Bay Rays. Or if ESPN weren't completely in their bag. It's a complete and utter joke that their school couldn't fill it's student section at the Final Four. I don't care how many fans they sent to the Women's Final Four.

So Houston, it's up to you tomorrow night. I know this isn't as prestigious an event as it should be, and I know it's not likely you'll have much of a rooting interest on the ground. But if you're looking at potentially getting into a championship game for $30 or cheaper, I don't know how you can be mad about that. Get there early and show that we're willing to fill the place up, even if UConn fans aren't.