For the second straight season, every single Houston Cougars' football game will be broadcast on TV, most notably the brand-new Pac-12 Network and the growing CBS Sports Network, which announced on Thursday that it will carry two of the Cougars' games this fall.

Five games will be covered by the Fox Sports Net regional networks, including the Sept. 29 "Bayou Bucket" game against Rice at Reliant Stadium, as well as games against UAB (Oct. 13), at SMU (Oct. 18), at East Carolina (Nov. 3) and Tulane (Nov. 24).

Houston will appear on two national broadcasts thanks to the CBS Sports Network: vs. Louisiana Tech (Sept. 8) and vs. Tulsa at (Nov. 10), both home games at Robertson Stadium.

The yet-to-debut Pac-12 Network is scheduled to broadcast the Cougars' game Sept. 15 trip to the Rose Bowl to face UCLA (check your local listings, cable guides and probably Google, too).

The rest of the season's games will be available regionally on CSS. Here's a look at the complete schedule: 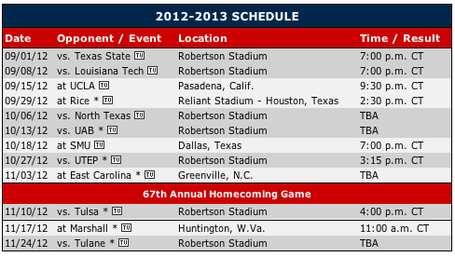 Clearly, the boost of a non-BCS school boasting a full slate of televised games won't hurt in recruiting and revenue, as evidenced by this accompanying quote from new head coach Tony Levine:

"Competing in front of a television audience week in and week out spreads the Houston Football name across the nation to future student-athletes," said Levine, who begins his first full year as head coach with the program in 2012. "Our coaches and student-athletes have worked hard in the off-season and will be ready to go when training camp starts in August."