This week the Houston Dynamo travel to Los Angeles to take on the Galaxy for the 2011 MLS Cup. Dynamo fans are encouraged to attend events throughout Houston this week to cheer on their team and to dream, scream, believe.

Here is the official schedule of events in Houston this week as the Dynamo prepare to face the Los Angeles Galaxy in the 2011 MLS Cup Final on Sunday. 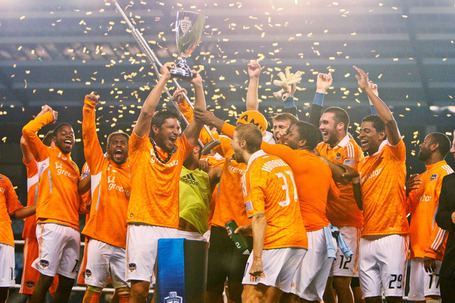 When: Tuesday, November 15, 11 a.m. - 2 p.m.
Where: Dynamo Stadium site (corner of Texas and Dowling)
More: Tuesday is America Recycles Day! To celebrate, we'll be offering fans the opportunity to take a picture in the new Dynamo Stadium. Just bring one piece of recyclable material to the Dynamo table on the corner of Texas and Dowling and you'll be given the chance to take this commemorative photo with the Dynamo Stadium site as your backdrop! Don't miss out on this exciting opportunity, courtesy of Greenstar Recycling.

When: Wednesday, November 16, 5 p.m.
Who: Houston Mayor Pro Tem Ed Gonzalez, Dynamo players and coaches, Dynamo Diesel, Dynamo Girls
Where: City Hall (901 Bagby)
More: Join us on the steps of City Hall to show your support for the Eastern Conference champions before they hit the road for the 2011 MLS Cup final. Dynamo Players, Dynamo Girls and Dynamo Diesel will be there to join in on the fun! Plus, the Mayor's Office will read a city proclamation supporting the Dynamo! During your visit, be sure to stop by the Greenstar Recycling tent and drop off your recyclables.

When: Friday, November 18, ALL DAY
More: Friday is Dynamo Day in Houston! We want to "Orange Out" the entire city! Be sure to wear your favorite orange gear to work or school in the lead up to MLS Cup!

When: Sunday, November 20, 8 p.m. CT
Where: Bar Munich (2616 Louisiana St, #103, Houston, TX)
Who: Dynamo Girls and the Dynamo Street Team
More: Come out to Bar Munich and watch the Houston Dynamo as they take on LA Galaxy in the MLS Cup final. The Dynamo are looking to join D.C. United as the only team in MLS to win three MLS Cups.There will be drink specials for all fans in attendance. Fans are encouraged to arrive early as a standing-room only crowd is expected.