On Yao Ming, The MVP And A Return To Unfamiliar Territory

Share All sharing options for: On Yao Ming, The MVP And A Return To Unfamiliar Territory

Sam Amick has been criminally underrated as a writer for quite some time now. Not just as a basketball writer, but just in general, as a writer. His recent piece on Yao Ming does nothing to disprove this notion: he offers readers a glimpse into the not-so-elegant aspects of a comeback quite unlike any other.

Here's your first excerpt of interest:

This is the "Most Valuable Pump" -- brought to you by Norma-Tec -- a device with a marketing-friendly moniker that is currently pushing Yao's blood from the bottom of his leg toward the top. And after suffering through 16 months away from the game and the reality that his latest injury had him thinking retirement before he even turned 30, it's no wonder Yao is having some trouble above the neck too.

"You need to make one of these (machines) for my head," the 7-foot-6, 310-pound center says with a wry smile to the team's physical therapist nearby. "I've got some blood pressure problems."

In case anyone is wondering, this is what an MVP looks like. 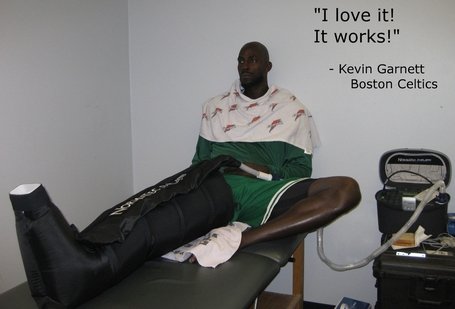 Second, I found this paragraph to be quite insightful.

Suddenly, it's acceptable to think short-term, to take a day-by-day approach that just so happens to block out the big picture that so often weighed him down. Tonight, he'll face off in Hidalgo, Texas, against Orlando's Dwight Howard, the matchup that was once great basketball theater having changed immensely since last they saw each other. As for tomorrow? No need to go there until you get there.

This sums up Yao's last two years of life in a few sentences. He's no longer the mystic, heroic playmaker that he used to be. His limits have been discovered. He's vulnerable, now. Amidst all of the past injuries, we've never seen this kind of Yao Ming, the cautious Yao Ming. It has always been about working hard to get back and playing as often as possible and thinking ahead to the playoffs and such.

No more. This is a different process. Thanks to Sam Amick, it's easier to recognize this fact.