For those who have access and can check it out now, James Dolan, owner of the New York Knicks among other mega-properties of value in NYC, also has his own rock band on the side known as JD & The Straight Shot. They bill themselves as a classic rock band with their own Wikipedia page and discography listed. That's key because someone missing Jeremy Lin took it upon themselves to alter Dolan's musical legacy.

Just in case something changes -- given the nature of Wikipedia, you can check out an example below of a city mourning the loss of Lin to the Houston Rockets. Or perhaps Dolan really is Linsane himself and recorded an ode to him even several years ago. Either way, it's comical the lengths some people are going to talk about the loss of Lin. 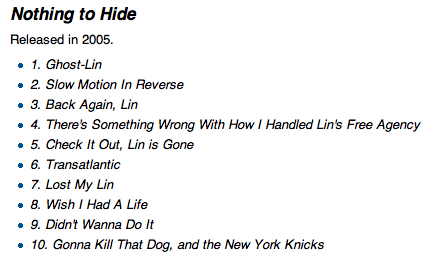 Read more on the Rockets at The Dream Shake blog at SB Nation Houston. Our NBA hub page all the news and analysis around the league you need. Also, be sure to subscribe to this Youtube Channel for video commentary.