The Two-Day Hangover: Saying Goodbye To The Bye Week

The Hangover spent the bye week pondering Texans running backs, David Carr's return the gridiron and Terminator 2. No, we're not going to leave that last one alone just yet.

Share All sharing options for: The Two-Day Hangover: Saying Goodbye To The Bye Week

When I was driving back from Houston last week, I was struck by how absolutely awful East Texas is. There is literally no place between Humble, TX, and Texarkana that would not be improved by the detonation of a small nuclear device. Between the dry counties, the hand-painted religious signs (according to one, I kid you not, God is angry at America because of "internet porn"), and the speed traps, I am pretty sure that Hunter S. Thompson was wrong --- Lufkin, TX, not Bazooko’s Circus, is where the whole hep world would be if the Nazis had won the war. It is the Sixth Reich.

The only thing that could redeem East Texas, save for the aforementioned nuke, is if the entire area between Texarkana and Cleveland and between Atlanta and Palestine were paved, so that each unfortunate traveler could get his own lane and drive as fast as he could to get through that God-forsaken armpit of humanity.

Few things trigger the Schadenfreude that seeing David Carr under center for a team other than the Texans. Case in point: Sunday, Zoolander was forced to take meaningful snaps for the San Francisco 49ers after Alex Smith was knocked out of the game. The result was a déjà vu-inducing 6-13, 67 yds, 1 INT, and a 23.6 rating. In case it is not clear just how abysmal that outing was, consider that, had Carr thrown all 13 passes directly into the ground --- sidearmed and softly, of course --- his rating would have been 39.6. (Granted, this is also a good argument for why rating is pretty stupid, but work with me here.)

If you are like me, I feel sorry for your friends and loved ones, but you might have wondered just how that awful performance stacked up with some of Mr. Mittens’ truly execrable outings. By my calculations (read: looking at Pro-Football-Reference.com), Sunday was Carr’s 5th-worst outing in the NFL. Games that were worse?

Wide receiver jumps to make a catch. Rather than jumping, the DB catches the WR and runs out of bounds without letting the WR touch the ground. Bonus points if this occurs more than 5 yards from the sideline.

And now, a ranking of ten random items.

Yards Arian Foster is on pace to rush for in 2010. So, you know, it’s totally understandable that Kubiak would say they planned to run Derrick Ward more frequently post-bye. And, by "understandable," I mean "Titans-fan stupid."

Seriously, I like Derrick Ward well enough. Though I have compared him to continental drift, I’m constantly amazed at how slowly he seems to be moving while not getting caught from behind. I also think he’s been a great change-up to Foster over the last few games.

THAT SAID, Arian Foster has been nothing short of awesome this season. I’ve mentioned his field vision on more than one occasion in this space. On top of that, his 5.5 yards/carry is better than Adrian Peterson, Chris Johnson, Michael Turner, Ray Rice, Frank Gore, Rashard Mendenhall, and a whole host of other backs not named Jamaal Charles. It’s almost as if the coaches are looking at the last two games --- Foster struggled mightily against New York and he "only" managed 71 yards against Kansas City --- rather than the body of work to this point.

But this isn't really about Slaton or 2008, so how does Foster stack up against Ward? Foster’s three 100-yard games this year are as many as Ward has in his entire career. Foster’s six TDs are double what Ward has done in any season. Foster’s 9 career TDs (in 12 games) match Ward’s career total (in 71 games). Foster’s 36 rushing first downs this season are better than Ward has done in all but one season (2008, 54). Foster’s 635 yards in 6 games are 141 yards better than the best six-game stretch of Ward’s career (week 11 through week 16, 2008), and Foster’s total is also 72 yards better than any six-game total Ward has in a season (weeks 12, 3, 1, 4, and 5 in 2007). Honestly, other than Ward’s 38-yard TD against Kansas City, which, admittedly, was a nice run, I can think of nothing that would suggest that Ward is the better running back option for this team right now than is Arian Foster.

Whether all Foster or a combination of Foster and Ward, if Houston doesn’t run the ball at least 20 times in the first half against Indianapolis and force Indy to prove that they can stop something that they absolutely could NOT stop in week 1, the entire coaching staff should be fired at halftime, and DeMeco should coach the remainder of the game.

I have this sinking feeling that Houston is going to over-"think" things, assume that Indy will be looking for them to run, and come out throwing early and often. Except I’m pretty sure Indy was looking for them to run at some point in the second half in week one, and we saw how that turned out. Don’t reinvent the wheel, Gary; run the ball until they prove that they can stop it, and then exploit the weaknesses that Indy’s adjustments to the run will open up in the passing game. Please?

Yards Matt Schaub (11,592) needs to overtake David Carr (13,391) as the Texans’ all-time passing yardage leader. At his current pace, Schaub would throw for just under 2,600 yards over the last ten games. (By the way, Schaub’s second TD pass against Oakland earlier this season gave him 60 as a Texan, moving him past Carr (59) for that record.)

After last week’s discussion of the Terminator paradox, I’ve spent a fair amount of time thinking about the whole thing. JMay mentioned in the comments the concept of time loops, which, technically, do not violate the rules of quantum physics. Basically, a time loop is the situation where the time traveler becomes the cause of an event that led to his traveling back in time in the first place. (There’s also a slight variation like you saw with Marty McFly and "Johnny B. Goode" in Back To The Future, where Marvin Berry played Marty’s version of the song for Chuck Berry, which Chuck then turned into a hit, meaning that, basically, no one ever wrote the song. Also, as long as I’m on this tangent, Marty was already into the song when Marvin called Chuck; how would Chuck’s lyrics, written later, exactly match the lyrics Marty had sung? Marvin was only half paying attention, too, and was stoned, so it’s highly unlikely that HE recalled all the words. But I digress.)

ANYWAY, the time loop is what it is --- a cinematic trope that is theoretically possible (though some disagree as to whether you can change the future in loop) and is a staple in science fiction. That’s not what bugs me now.

Rather, I was thinking about Terminator 2, and I realized that there’s a huge difference in the underlying plot between the first and second movies. In T1, they did not change the future; Kyle Resse went back in time to protect Sarah Connor (and, as it turned out, knock her up) so that John Connor would be born and lead the rebellion. Basically, all of Reese’s efforts resulted in the future remaining exactly the same as the one he left.

In Terminator 2, however, Sarah says more than once that the future is not fixed. This is why she goes to kill Miles Dyson before he can help create Skynet. Dyson, of course, blows up the entire Cyberdyne building, and Sarah and John toss the cyborg arm and chip (left by the Terminator crushed in the hydraulic press at the end of T1) into the molten steel.

Wins by the Dallas Cowboys in their new stadium. Also, number of teams I could think of who made the playoffs after starting 1-5. Also, percent chance that Wade Phillips is the Cowboys’ head coach next season. Also, amount of sympathy for Cowboys fans that everyone else in the world feels.

Also, number of passes Tony Romo will throw next week. 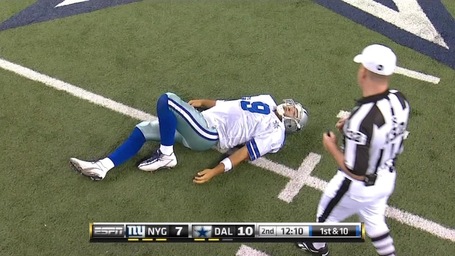 A Quick Review Because I Just Heard "Acronym" Used Incorrectly.

"NFL" is an initialism; "NASA" is an acronym. "Smog" is a portmanteau, but that's really neither here nor there.

Per people who know these sorts of things, Brian Cushing is going to move to MLB in place of the injured DeMeco Ryans.  I love this both because Cushing seemingly has all the tools to succeed in that spot and because it keeps Zac Diles at WLB (where he's less of a liability than he would be at the other two spots).  Even better, rumor is that Kevin Bentley (aka Lyndon Veins Johnson) will play SLB rather than Xavier Adibi, meaning that we aren't going back to that "ooh, look how cute the tiny undersized SLB is!" strategy of yesterseason.

I don’t have many rules in life, but one I do follow to the letter is, if someone writes a Rockets-centric NBA preview using 25 quotes from Super Troopers, I am going to link to it, and you cannot stop me.

Sunday’s 3 TD, 2INT performance by Kerry Collins was his second 3TD game as a Titan and his eighth 2INT game. For comparison, Vince Young has 3 career 3TD games (two of which were 2 pass / 1 run TD in 2006) … and 11 games with at least 2 INT. (I say "at least" because two of Young’s games were of the 3 INT variety, a feat that Collins has yet to accomplish as a member of the team from Methopotamia.)

I generally skim Peter King’s MMQB for AFC South-related nuggets and discard the rest of his inanity appropriately. However, in his Ten Things I Think I Think this week, Fatty McStarbucks had the following gem:

a. Davone Bess. As is the case with so many undersized receivers, 31 other teams have to be kicking themselves for passing on him in the draft two years ago.

Ignoring the stupidity of your assuming that Bess would have fit the needs of all 32 teams, I still have two problems with your statement. First, your meaningless platitude can literally be applied to every good player taken after the first round (or even taken with the last pick of the first round). Second, and more importantly, Bess was undrafted in 2008, meaning that EVERYONE passed on him, most did so at least seven times, and your assertion sucks.

Much like the decision to name a child "Marijuana Pepsi," the decision by Norv Turner to rely on the golden (read: pyrite) leg of Kris Brown to tie the game from 45 yards rather than going for it on 4th & 2 was inexplicable enough that I started laughing. When San Diego was penalized 5 yards, and Brown suddenly had to hit from 50, I was cackling like a mad man. When Brown predictably missed, I was relieved, knowing that all was right with the world.

TXT MSG of the Bye Week

No Texans game meant far fewer texts received. Still, this one from Shake re: Kris Brown’s kick was very solid:

When they got the false start, you knew God was snickering.