The Two-Day Hangover: Where The Texans Ground Game Is Making Itself At Home

Happy to see the Texans in first place, The Hangover gets numerical with musings on Arian Foster's impressive start, Eugene Wilson's last call and crazy-nerdy talk about planets and lightyears and things.

Share All sharing options for: The Two-Day Hangover: Where The Texans Ground Game Is Making Itself At Home

Saturday morning, my kids were watching something awful1 when, suddenly, the screen went dark. Worse, the sound was still coming through loud and clear. After a few moments of panic and anger, in which I accused both children and both dogs of having broken my beloved television, I tried to troubleshoot.

Turn it off, turn it on … no picture.

Unplug it, plug it back in … nothing.

Google the symptoms … uh, oh. Turns out Samsung plasma TVs, like many brands, occasionally have a problem with frying one or more circuit boards with no warning. Now, I am still under the extended warranty (only time I’ve ever bought an extended warranty for anything, by the way), so I called and scheduled an in-home repair for Monday afternoon.

The repair guy thinks he can fix it --- I personally hope he cannot, since that would net me a new TV in place of my late 2007 model --- but it could take up to a week. In the meantime, I have commandeered the 19" television from my son’s room. Yes, that’s right: I took the TV out of Gabe’s room so that I would have something to watch in the den without giving up the TV in my bedroom.

Parent of the Year Committee, I await your call.

Wins by Indianapolis against AFC South opponents this year. The other two times the Colts were .500 this late in the season, 2002 and 2008, were the only two years that they did not win the AFC South.

Sacks allowed by the Texans offensive line against Oakland, interceptions thrown by Matt Schaub against Oakland, and number of NFL players with more rushing yards than Arian Foster in 2010.

Games JUST WON by Vince Young on Sunday. Wait … this has to be a miscalculation, right?

If you are not a tremendous dork, you probably missed the discovery of Gliese 581g, a "nearly Earth-sized" plant within the so-called Goldilocks zone of its star (Gliese 581). Initial observations suggest that 581g is between three and four times the mass of the Earth and has a radius between 1.3 and two times Earth’s. This size, plus 581g’s proximity to its star, mean that conditions are theoretically right to support life (i.e. the planet, if it has an atmosphere, would probably have water).

While this is very, very cool, it is only surprising in the sense that we were able to locate something so small over twenty light years (200,000,000,000,000 km) away. Mathematically, it is almost certain that there exists life in some form or another on at least one other planet out there.

Time left in the first quarter when Gus Johnson and Steve Tasker decided they might want to bother to mention that Arian Foster had not yet played. Quality work there, fellas.

I realize that a lot of people love Gus Johnson. "Oh, he’s so enthusiastic! He gets excited and yells!" So does my daughter when we go to the park; it doesn’t mean that she would make a good play-by-play announcer. In fact, it just sort of makes her obnoxious and annoying, much like Johnson when he sounds like Jacoby Jones wiggling for a couple yards on a screen pass was the greatest thing Johnson had ever seen. (Lately, Johnson has added this weird growl when he is being really emphatic, like he’s been listening to too much mid-90s Garth Brooks.)

On top of sounding apoplectic on every play, Johnson is also among the worst announcers when it comes to identifying which defensive player(s) actually made a play. After all, it is much easier just to name whichever player was last to jump on the pile. Throw in Steve Tasker’s lack of insight and penchant for referencing his playing days even when the context doesn’t call for it, and I can’t understand how people legitimately like having Johnson do their games.

Sure, his ridiculous excitement is far better than Joe Buck’s proselytizing or anything involving Phil Simms, but that doesn’t mean Johnson doesn’t still suck.

Interceptions by Troy Nolan against Oakland and number of potentially huge interceptions dropped by Eugene Wilson prior to the Oakland game.

Most baseball fans know the apocryphal story about how Yankees 1B Wally Pipp sat out with a headache (or, in some accounts, a fractured skull), and was replaced by a youngster named Lou Gerhig, who would not relinquish the position for fourteen years. While the story isn’t true --- it first appeared shortly after Gerhig’s streak ended and has no real basis in fact other than Pipp actually suffering a fractured skull from a batting practice fastball … a month AFTER Gerhig had take over at first --- it has become shorthand for losing one’s starting spot when a minor injury gives a younger, better player a chance to shine in your spot. (For football, maybe we should call this getting Bledsoed.)

Whether the legend is true or not doesn’t really matter, though; it just makes for a good story. Thankfully, it looks likely that we can put Eugene Wilson on the list of people who were Pipp’d out of a job, and not a moment too soon. Even ignoring the two INTs (two more than everyone else on the team combined in 2010, mind you), Nolan still acquitted himself well in the free safety position. No, he was not Ed Reed, but (more importantly) he was also not Eugene Wilson. With any luck (read: common sense), that’s the last we’ll see of Wilson in meaningful action in your Texans’ defensive backfield.

Weeks by which the Texans have reached 688 rushing yards more quickly than in any previous season. The Texans are currently the NFL’s leading rushing offense after four weeks. They have never previously led the league even after week 1. This is not really surprising; even before the pass-happy Kubiak era, when Houston was saddled with Zoolander, Capers, and Co., it’s not like they ever had a big time back.

Hey, Chuck Cecil, What Place Are The Texans In? 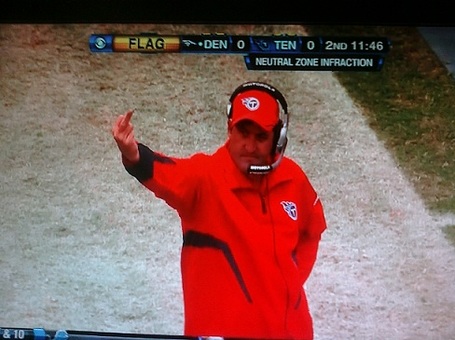 Arian Foster’s 537 rushing yards are 126 more than #2 Rashard Mendenhall. That is the same gap as between Mendenhall and #10 Steven Jackson. In 2008, when Steve Slaton was our back of the future, he had three games all season where he averaged 6 yards/carry or better; Foster already has three. Slaton had only one game in all of 2008 with a higher rushing total than what Foster is averaging over four games. At Foster’s current pace, he would best Slaton’s 2008 rushing total early in the tenth game of the season. If he could maintain this pace over the next 18 regular season games, he would break the franchise rushing record.

Translation: I digs me some Arian Foster.

And now, a quick graphic regarding how good Denard Robinson is

Three sacks between the two starting DEs and, surprisingly, two came from Antonio Smith.  Coming from a guy who had never had more than one sack in a game in his career and whose career high in sacks for a season is 5.5, Smith's performance was particularly surprising.

Oh, speaking of that other starting DE, it was nice of him to actually show up this week.  Always a plus.

Things that are not fast, but are effective

You know how you have to have personalized plates and names of corporations and stuff like that approved by someone before you can use them? I’m just throwing this out there: it might not be such a bad idea to have a similar verification process for names parents choose for their children.

Maybe there could be a pre-approved list --- oh, you want to use "Frank?" Sure thing, go right ahead! --- and you would just have to get approved if you chose something not on the list. That way, we cut down on needless paperwork and streamline the process and build in an incentive for people not to get creative.

Why do I say this? Because of this. Seriously, you named your daughter "Marijuana Pepsi"? I mean, really? That would never get through if I were in charge.

(The real question is whether this name is better or worse than "La-a," pronounced "La-dash-uh," and "D’," pronounced "dapostrophe." Yes, I’ve met people with both of those names. Yes, they were related. Yes, they looked at me like I was the jerk when I had no idea how to pronounce their names.) (h/t beefy for the link)

It is October 5th. Your Houston Texans are alone in first place in the AFC South, the only team in that division with a winning record. Let that sink in for a minute.

This guy is back, and Ahmad Bradshaw might want to take out additional life insurance.

Picking up where we left off last week with my buddy Paul’s hip-hop recommendations:

From someone who asked to remain nameless:

The Texans remind me why I love pot.

And BESFs lose. I like to think God is trying to balance out the Longhorn travesty that I'm having to live with this year.

From me2, in response to Tim's pointing out that the Texans were in first place:

It feels weird and awesome. It's like a blumpkin.

----
1 Namely, anything on Nick Jr. that is not Olivia, Jack’s Big Music Show, or Backyardigans.

2 Normally, I wouldn't quote myself here, but you gotta admit that one was pretty solid. Also, it's my column. So there.