Frank Bush Should Really Get In Touch With Matt Millen

Share All sharing options for: Frank Bush Should Really Get In Touch With Matt Millen

Frank Bush isn't completely blind, he knows that his tenure as Texans defensive coordinator is over. He's created one of the worst defenses of all-time, complete with a secondary that couldn't cover sacks of rice, let alone Jerry Rice. But don't worry, he's approaching his latest challenge the same way he's approached everything else: optimistically!

"I've got to find a way to sell myself to another organization," Bush told the Houston Chronicle on Friday. "I'll stay positive. I'll stay upbeat. I'll keep believing in the things I do."

Here's what I imagine Frank's resume looks like following this season: 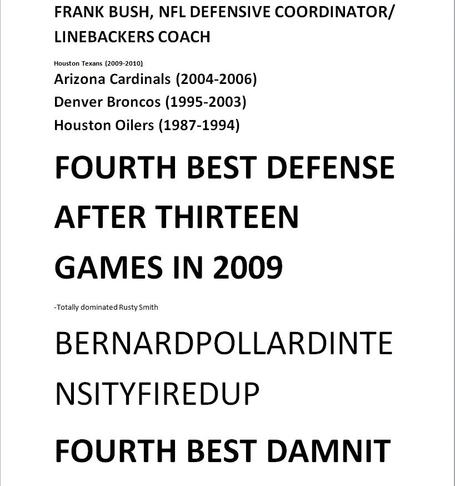 But really, why would being a part of a historically awful defense hold you back from other things in football? Matt Millen put together the worst defense of all-time AND an 0-16 team, and all that happened to him was that he got to call virtually every other football game on TV for the past three months.

A quick Google search revealed no information on who Millen's agent is, but trust me Frank, get in contact with that guy ASAP. You've got a future in inane banter ahead of you, hopefully while doing every game that is halfway pertinent to Houston football so that we're all reminded of your sad tenure way too often.