VIDEO: Raiders Had Only 10 Defenders On The Last Play Of The Game

Share All sharing options for: VIDEO: Raiders Had Only 10 Defenders On The Last Play Of The Game

To add insult to injury to the Texans 25-20 lost to the Raiders is that on the last play of the game the Raiders only had 10 men on the field. Even with only 10 men the Raiders defensive back Michael Huff was able to intercept Matt Schaub as he was scrambling to find an open Texans receiver.

Video and photo after the jump. 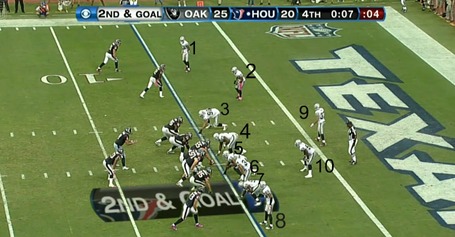 At the end of the game there was a lot of confusion since on the play prior Matt Schaub completed a 35 yard pass to tight end Joel Dreessen, and the Texans had no timeouts and had to spike the ball so that they could run one more play. So, it is possible that in the short time the Raiders did not notice that they were playing with only 10 men for the last play of the game and then for them to stop the Texans is impressive.