Madden's swagger ratings last year were met with much derision, so thankfully they did away with them in this year's version. Don't worry, because I'm sure they wouldn't replace something that asinine with something even more asinine this year.

Oh? They did? Gotcha.

So this year Madden's ridiculous player attributes involve lots of silly things: confidence, consistency, high motor, and most importantly, clutch. As you might have expected from a team that lost a lot of close games, the Texans that have been leaked have some very sad ratings across the board this year when it comes to clutch-itude. PIctures under the jump. 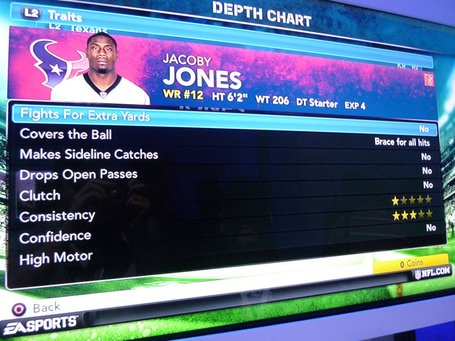 Jacoby Jones doesn't have confidence? I take it Madden has never taken a look at his Twitter, because the black knights is about to hit da street. 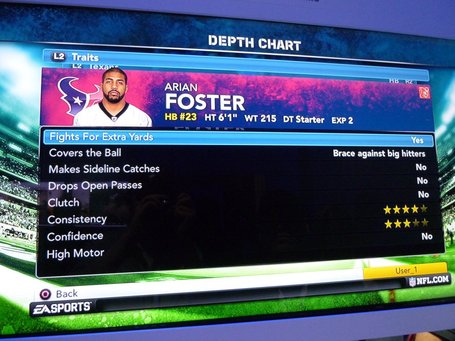 Good old un-clutch Arian Foster. When I think of that drive that broke the Colts' collective back in Week One of 2010, in a game that at the time was one of the most satsifying and relevant wins in Texans history, I thought: "God, Arian is really shrinking on the big stage." 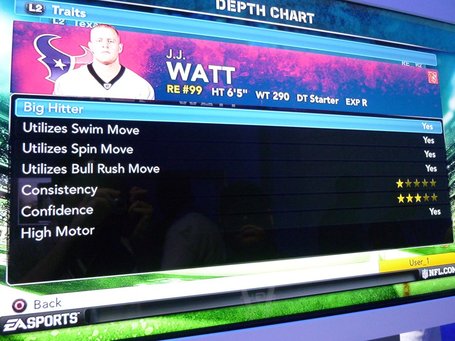 When I think of inconsistency, I definitely think of J.J. Watt. If you put on his college tape, you can see him flailing like a geriatric on one play and then bull rushing a first-round quality LT out of the picture in the next.

In related news: Madden continues to be ridiculously pedantic, and I miss the NFL2K series.