Share All sharing options for: Houston Texans Prepare To 'Just Do It' With Their New Nike NFL Apparel

One of the underlying stories for the 2012 season is that the NFL is undergoing a major overhaul with their apparel. For the last 10 years Reebok has managed the apparel sales of the NFL, but 2012 will mark the beginning of Nike managing the NFL apparel throne. The world's most profitable professional sports league looks to benefit from a brand that will shine a major spotlight on the apparel as Nike prepares for a major announcement on Tuesday, April 3.

After the jump, check out one of the first shirts that will be available for sale for the Houston Texans on April 29.

Houston could easily use the mantra "Just Do It" for their 2012 motto. In 2011, they finally did "it" in making the playoffs and winning the division for the first time in the franchise's history. Now in 2012, there's only one goal on the minds of Texans fans, Super Bowl or bust. There's only one thing left for the Texans to do, and this t-shirt is great first thought for players like Andre Johnson and Arian Foster. 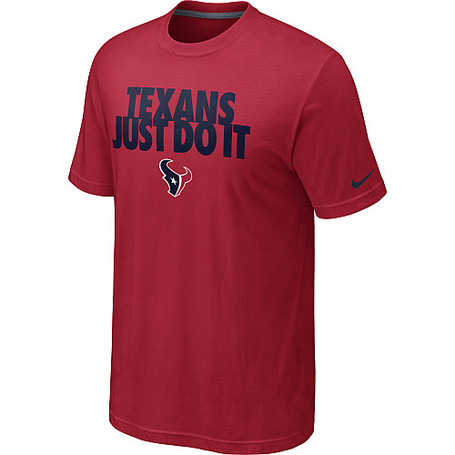