PHOTO: Houston Texans Hold Cheerleader Tryouts, But You're Not Interested

Two weeks until the Draft and the majority of the splashy free agency moves have been already been made? Don't doubt the shield - the NFL still dominates the news cycle, even if it takes cheerleaders to do it. The Houston Chronicle and the Texans' official site have a variety of photo galleries and updates from this past weekend's Texans cheerleader tryouts. 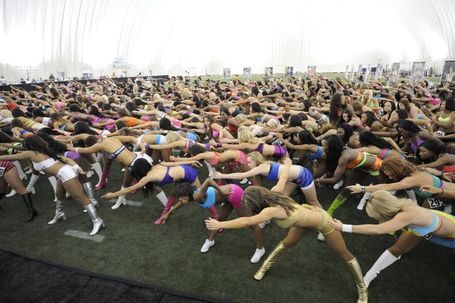 None of this has anything to do with football - if not for the playing surface they practiced on, anyone of these galleries could be confused with a casting call for TLC programming or a 60s sci-fi skin flick. But here we are, talking about pro football again. Well played, Goodell.

For more on the actual football part of professional football, be sure to check out Battle Red Blog and SB Nation's NFL page.