Texans Vs. Packers Is Seventh Most Expensive Ticket For 2012 NFL Season

If you buy something from an SB Nation link, Vox Media may earn a commission. See our ethics statement.

Share All sharing options for: Texans Vs. Packers Is Seventh Most Expensive Ticket For 2012 NFL Season

The Houston Texans have cracked the NFL's 2012 Top 10 of Seat Geek, a search engine dedicated to aggregating the secondary market for live event ticketing. The Texans' October 14 home game against Green Bay is currently averaging $374 a pop, double the price of any other game on the schedule: 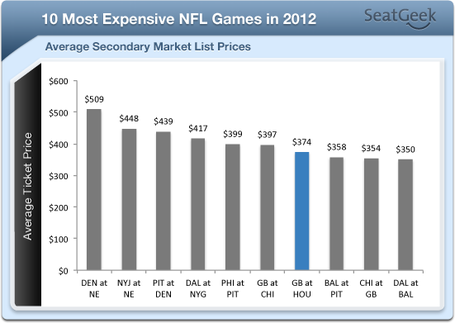 The Packers' national fan base certainly drives up prices, but so does demand - Green Bay hasn't played at Reliant Stadium in eight seasons. Nothing comes close to that game, but not surprisingly, the $181 average ticket price for the Texans' home rematch of last year's playoff loss against Baltimore October 21 is the next-highest price.

Looking for a bargain - and the professional football equivalent of pink slime NFL patties? Jacksonville's trip to Houston on November 18 is averaging $129, or roughly face value.

For more on the Houston Texans, check out Battle Red Blog and SB Nation's NFL page.