Thomas Johnson, the No. 4 rated overall wide receiver recruit according to Rivals, has committed to Texas A&M, announcing the news live on ESPNU on National Signing Day 2012. Johnson, who played for Skyline High School in Dallas, Texas, chose the Aggies over in-state rivals Texas and TCU, and west coast teams Oregon and Cal. 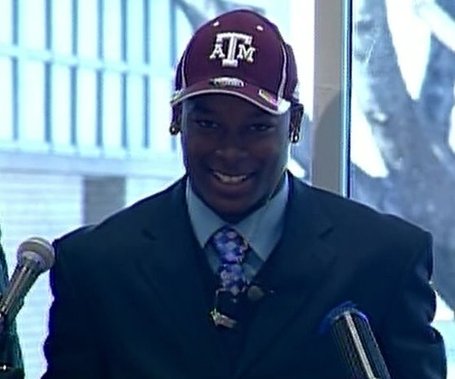 Johnson should be considered a leader for announcement of the day, as he returned fire when asked by the ESPNU panel about his pick, polling the analysts for their pick before pulling out an A&M hat.

Johnson, a 6-foot-0, 180 lb. wideout, is considered the 34th best recruit in the nation, and the fifth best overall recruit in the state of Texas. His addition to the Aggies comes on the heels of Missouri City, Texas, wideout Bralon Addison committing to Oregon over A&M, his longtime first choice.

For more on Thomas Johnson and Texas A&M football recruiting, visit I Am The 12th Man, and SB Nation Houston. Click the link for more on National Signing Day 2012.