COME ON GUYS, THEY'RE NEW HERE AND EVERYONE KNOWS MAPS SUCK, THAT'S WHY TEXAS IS SO BIG AND GATHERED ENTIRELY IN ONE CORNER: 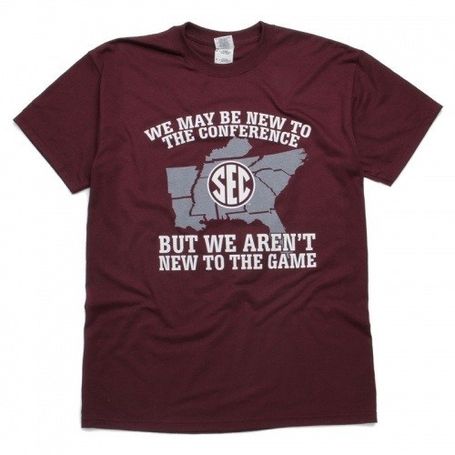 Sure, this official A&M t-shirt forgot to include fellow refugee Missouri (CUZ THEYRE B1G SPIES, Y'ALL) and unnecessarily included the state of North Carolina, but that was only to show how odd a fit Kentucky really is in football's "Game Of Thrones." We like that kind of smarmy bullying, especially for a new fish.

Rather than make curt remarks about the misuse of the Carolinas, SEC fans should applaud this shirt's subtle nod at the brutal Floridian culture war, as the derpy-do bravado text covers up South Florida, which is neither Southern nor SEC-ian, but bitterly tolerated as a Swiss-style neutral zone for farming defensive backs.

Color maps of all kinds and talk a little Aggie realignment at I Am The 12th Man and SB Nation's college football page.